If you recall, precipitation reactions are one of the main three you should know for this unit. Let's review it once more!

When ions aqueous solutions react, they may produce an insoluble (undissolvable) or barely soluble solid ionic compound. This solid product is called a precipitate. All sodium, potassium, and nitrate salts🧂 are soluble in water, so they aren’t precipitates. You don’t need to know any other solubility rules for the AP, but it doesn’t hurt to be familiar with common soluble and insoluble compounds. Table 4.1 is a table of solubility for common ions in water. Usually, the question will tell you if the compound is soluble and which solution it’s soluble in😊. 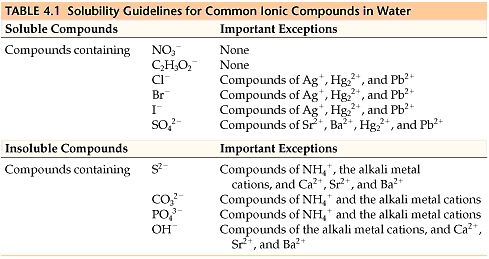 We went over this in key topic 4.2, but let's do a quick🏃 overview!

The best steps to follow when writing a net ionic equation are:

Knowing how to write the net ionic equation for a precipitation reaction is just the first step! Let's take a look at a concentration of ions question.

Part a: What is the mass of solid formed?

Part b: What are the concentrations of ions at the end of the reaction?

Since they didn't give us the equation, let's write it ourselves!

With precipitation reactions and concentration of ions questions, there will always be an insoluble product. In this case, it is either NaC2H3O2 or PbCl2. Since sodium is always soluble, PbCl2 is the precipitate in this question.

Now that we have the equation and know the precipitate, let's get into the math itself. The question provided us with the volumes and molarities for each reactant. Using these two pieces of information, we can find the number of moles of NaCl and Pb(C2H3O2)2.

Molarity = moles / volume in L - We have to convert the volumes we have into L by dividing by 1000.

Using the number of moles we solved for above, we can now use stoichiometry to answer part a.

The reactant that there is less of eventually stops the reaction and limits it since the reactant runs out. The other reactant is called the excess since there is still some of it left over, unreacted.

To find the LR, we have to do stoichiometry with both amounts. Convert each reactant into the precipitate:

Since there are less moles of PbCl2 using NaCl as a reactant, NaCl is the LR. Pb(C2H3O2)2 is the excess.

Yay, we did half the problem! Let's move on to solving for the concentrations of ions. In order for us to do this, we have to know the moles of each ion and the volumes of each ion.

Let's think this through conceptually a bit🧠. After PbCl2 (s) forms, what is left in the solution?

The ion that is in the LR and precipitate ALWAYS has a final concentration of 0.

In this next step, we can solve for the concentrations of two ions: Na+ and C2H3O2. These are considered the spectator ions since they aren't in the precipitate.

Na+: All you have to do now is find the volume, but we have to multiply the number of moles by 2 since NaCl has an initial coefficient of 2. To find the volume, we just have to add 20.0mL and 30.0mL.

C2H3O2-: We have to multiply by 2 here as well since there was a subscript on the reactant side of the equation.

This is slightly harder to find, but with some practice, you got this😌!

This is a very difficult question but once you practice and understand it conceptually, you'll begin to understand it. It is honestly a lot in one question and probably won't be tested like this. However, knowing it will strengthen your overall stoichiometry skills, so it doesn't hurt!🙃