The one thing you need to know about this task:

Overview of the SAQ

For SAQ 3, the topic will relate to content between:

For SAQ 4, the topic will relate to content between:

Each SAQ is made up of 3 parts: A, B, and C. These parts typically progress from simple/straightforward to complex/abstract as you move through them.

You will have 40 minutes on the exam to answer all three SAQs, and you are responsible for managing your time as you write. Some recommended timings:

The SAQ section is worth 20% of the exam, and it tests both your knowledge of history and your skill in answering questions clearly and concisely. It is worth your time to practice and develop this skill because you can get a lot of mileage out of a few simple sentences.

Different task verbs can clue you into how much detail or explanation is needed for a particular part of an SAQ. A simpler task can use a shorter answer, saving you time and energy for the more complex questions.

Some of the terms typically used on AP-style questions include:

Identify: provide information about a topic, without elaboration or explanation - typically this means you just need to give a basic answer with a specific example. You may be able to answer this question in only one sentence.

Describe: provide relevant characteristics about a topic - typically this means you just need to give a basic answer with the specific detail or examples needed. This answer may be slightly longer than an “identify” prompt but still doesn’t require as much explanation.

In both cases, “explain” questions require the most writing. You will not only need an answer and an example, but you may need to develop the initial claim of your answer somewhat to fully address the question.

TL;DR - answer the prompt, include your best piece of evidence, explain yourself if needed, then move on.

Answering an SAQ prompt is a balancing act: you have to give enough detail and explanation to create a complete response, but it isn’t supposed to be an essay, so you also have to keep things brief. Straightforward and to-the-point answers are preferred over flowery language.

For an “identify” or “describe” prompt, you should simply answer the question and include a piece of evidence to support your answer. This can typically be done in 1-2 sentences, depending on the prompt.

For an “explain” prompt (and there will be at least one of these in each SAQ set you write), you will need to write more to create a complete response. That’s where the ACE formula can really help.

A further complication: the stimulus-based prompts sometimes require you to make a direct reference or connection to the stimulus in your answer. In this case, be specific, but don’t quote. Paraphrase a key detail or idea and move directly into your answer. 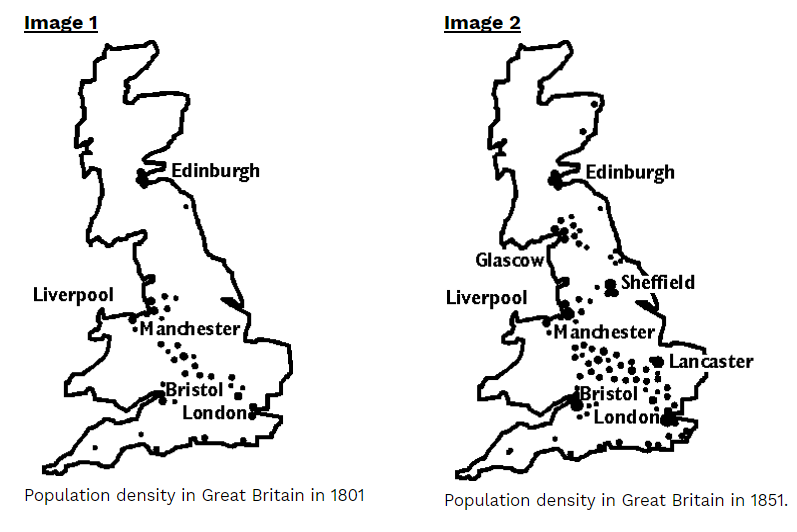 a) Describe the historical process represented by these two images taken together.

b) Identify ONE technological development that led to the historical process represented by these two images taken together.

c) Explain ONE environmental impact of the historical process represented by these two images taken together.

1. As the Industrial Revolution spread in Great Britain, people increasingly moved from rural communities into  cities, leading cities to increase in number and size.

Commentary: The thing that makes this response acceptable is that it describes the underlying process behind the growth of cities in Britain. Simply saying that the number (or size) of cities increased would not be acceptable, because it doesn’t address the historical process (urbanization and the movement of people from rural communities.)

2. The development of railroads led to an increase in the size and number of cities in Britain, as goods were able to be transported to the centers of production.

Commentary: There are multiple correct answers for this question, and a number of technologies would be appropriate to address here. Most important is to connect the technology to its effect on the maps.

3. As urbanization and population density increased in Britain, the air and water quality diminished. More and more factories were built in these cities. These factories were powered by coal, which released soot and smog into the air, and they dumped industrial waste into nearby rivers and canals, which made them unsafe to drink.

Commentary: An appropriate answer for this prompt should address an environmental issue such as air and/or water quality, disease, demographic changes, etc. An effective explanation should connect urbanization with the environmental effect and should include at least one specific example.

Americans today, and perhaps to a greater extent than ever before, who live within the Spanish system occupy a position in society no better than that of serfs destined for labor, or at best they have no more status than that of mere consumers. Yet even this status is surrounded by galling restrictions, such as being forbidden to grow European crops or to store products which are royal monopolies, or to establish factories of a type the Peninsula itself does not possess. To this add the exclusive trading privileges, even in articles of prime necessity, and the barriers between American provinces, designed to prevent all exchange of trade, traffic, and understanding. In short, do you wish to know what our future held? — Simply the cultivation of the fields of indigo, grain, coffee, sugar cane, cacao, and cotton; cattle raising on the broad plains; hunting wild game in the jungles; digging in the earth to mine its gold–but even these limitations could never satisfy the greed of Spain.

a) Describe economic conditions for European settlers living in Latin American colonies at the time of this letter.

b) Identify ONE historical development that might have contributed to Bolívar’s decision to write this letter.

c) Explain how Bolívar’s point of view as an educated Creole might have affected the writing of this letter.

a) Identify ONE cultural consequence of the growth of exchange networks from 1200-1450.

b) Identify ONE environmental consequence of the growth of exchange networks from 1200-1450.

c) Explain ONE way cultural and environmental exchange intensified from 1450-1750.

a) Identify one cause of global conflict in the first half of the 20th century.

b) Identify one short-term consequence of global conflict in the first half of the 20th century.

c) Explain one long-term effect a conflict from the early 20th century had on relations between states in the latter part of the century.