Overview of the Pacific

The Pacific Islands, located in the Pacific Ocean, comprise three ethnographic groupings—Melanesia, Micronesia, and Polynesia. Historical documentation for this region comes from a European perspective, and therefore some Pacific history may not be an accurate representation of the region’s native cultures. The cultures, unintelligible languages, and diverse historical experiences show an immerse construct in their society and region. 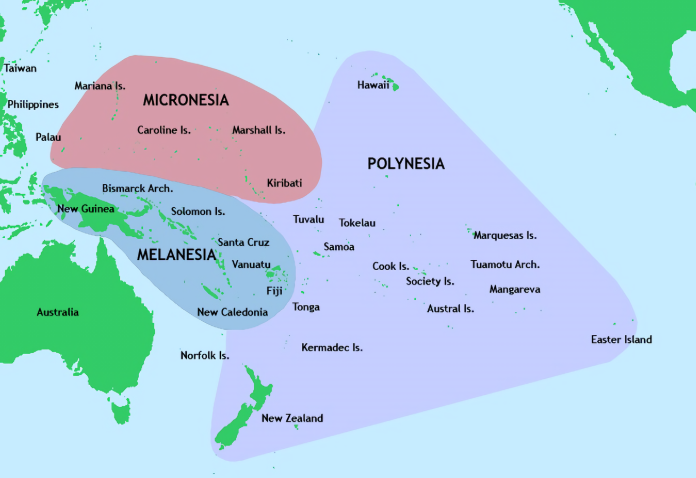 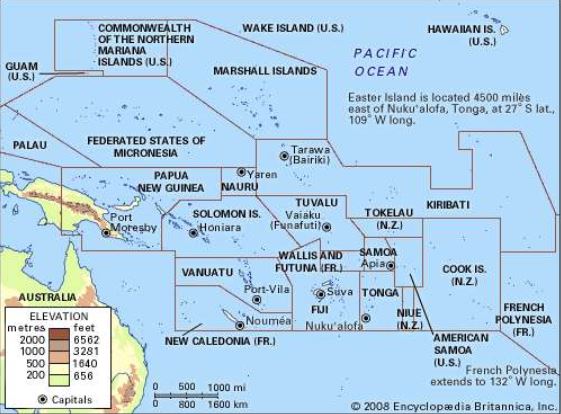 Before the time of European contact, Pacific people had developed their societies on the grounds of stone-based technologies, bones, and shell objects, and they cultivated tubers and fruits.
Genetic research has proven that some of the cultigens were native to wider areas, including New Guinea, a large Melanesian island bordering the Torres Strait. One of the most significant exceptions was the sweet potato, which reached Polynesia during the Colombian Exchange- the 15th and 16th century transfer of crops, people, and diseases between the continents.
Pacific peoples domesticated three main groups of animals: pigs, dogs, and chickens. In the area of food production, they also developed fishing techniques and considerable skills as sailors. Even in those times, Pacific people were able to conduct navigation between closer islands and trade between several islands.

From 1450- 1750, history focuses vividly on the effect of European exploration on the Oceanian people, their economy, and culture.

Since the embarking of Europeans in the Pacific, the Pacific cultures, populations, and economies have transformed.
While early in history, the Pacific remained relatively immune to global effects, this ended with contact between the Pacific people and Spanish conquistador, or conqueror, Vasco Núñez de Balboa. Around the same time, the Portuguese traveler Ferdinand Magellan became the first person to cross the Pacific Ocean, encountering the Pukapuka Atoll and Guam. 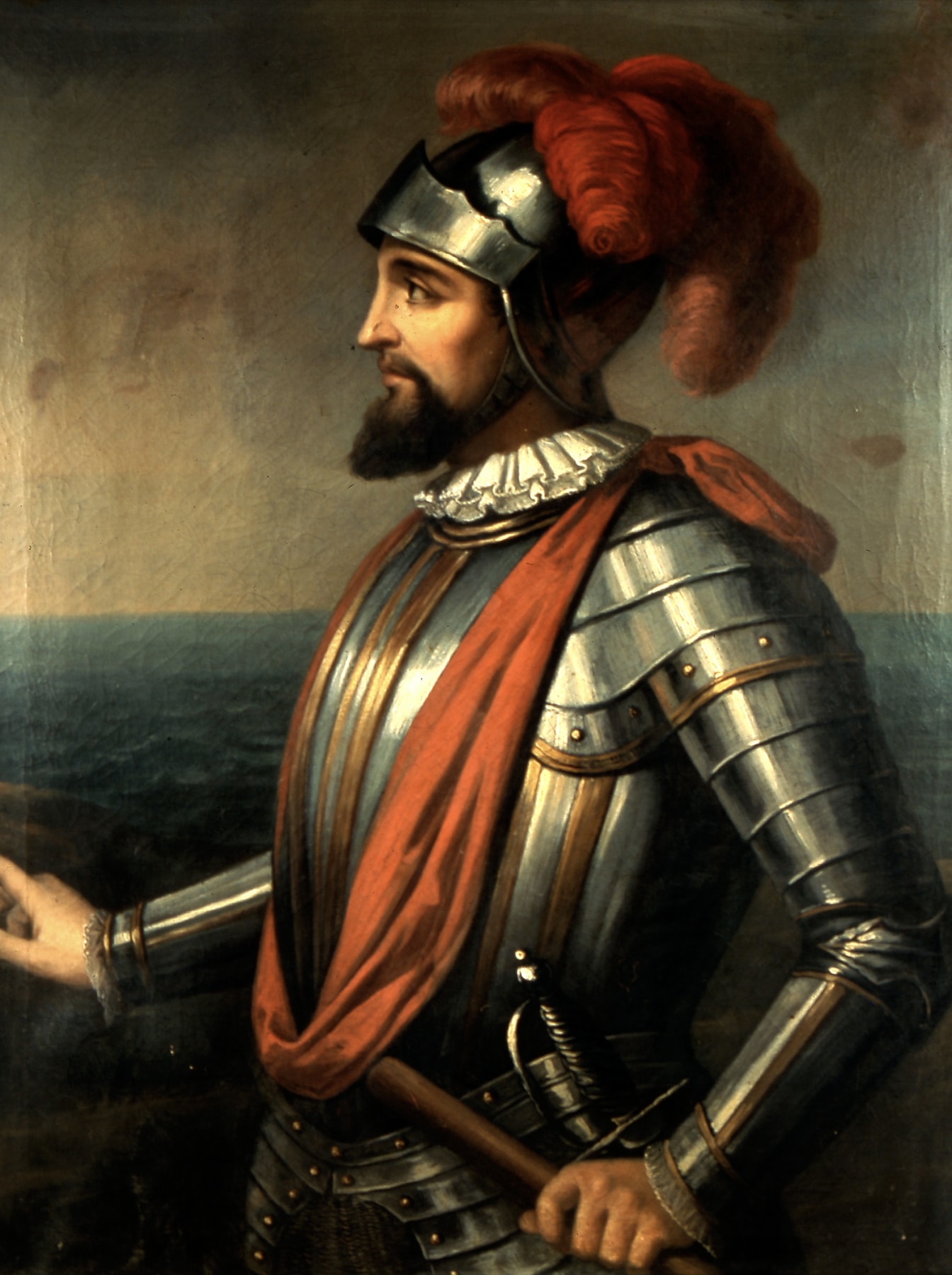 With the growing attention on the islands of the Pacific, more Spanish and Portuguese explorers began travelling to this area. Álvaro de Mendaña de Neira and Pedro Fernández de Quirós—Spanish and Portuguese settlers, respectively—discovered the Solomon Islands. Quiros then discovered the Cook Islands, Tikopia, and New Hebrides, now an independent nation known as Vanuatu.
The motivations of Spanish and Portuguese expeditions were wealth, glory, and the expansion of Christianity to native islanders, as well as self-interest.
Next were the Dutch, via the Dutch East India Company. They entered the Pacific after colonizing Indonesia in the 16th century. Dutch navigator, Jakob Le Maire, encountered the Tuamotus Islands, Tonga, New Ireland, and New Hanover, turning the Netherlands into prominent colonizers in the Pacific. The next Dutch navigator to reach the Pacific was an explorer named Abel Janszoon Tasman, who saw New Zealand, Tasmania, Tonga, some of the Fijian Islands, and New Britain. The motivations of the Dutch were to find commerce, however because of the dispersion of islands in the Pacific and lack of innovations, they found none.
🎥Watch: WHAP - Unit 4 Trade Routes: Contextualizing the Continuity/Change

In the late 18th century, with more outside influences, such as European castaways, missionaries, and traders the Pacific Islands were starting to become more prominent on the global stage.

With incoming people, there needed to be a sense of organization. The classification of the Oceanic people began with the French navigator and explorer, Jules-Sébastien-César Dumont d’Urville, who classified the islanders into categories of: Melanesians, Micronesians, and Polynesians.

Christian missionaries traveled to the Pacific in hope of converting the native people, who traditionally practiced polytheistic religions. In 1797, the London Missionary Society (LMS) sent missionaries to Tahiti to expand Christianity. The LMS were able to convert the Tahitian Chief Pomare II, and the people of Huahine on the Society Islands, the Tuamotus, the Cook Islands, and, later, Samoa. However, the LMS was unable to convert people in Tonga and the Marquesas. In later years there was also an introduction to different denominations, such as the Church of England, Catholics, and Methodists.
In Tonga, the king tried to unify his nation by adopting a constitution in 1875. The missionary kingdoms addressed problems of European lawlessness in the islands by trying to codify the law through scriptures. Numerous islanders opposed this idea, as it would cut ties with the concept known as mana, a religious concept sometimes described as an all-pervasive energy.
Although missionaries did convert many, they also had an influence on the political structures of Pacific Islands, introduced trade, and acted as moderates between the Pacific and other Europeans.

After Europeans began to permanently settle in the Pacific,  they also started to set up a plantation economy. Europeans established coconut, cotton and sugarcane plantations, hoping to begin selling these products in their native nations. This allowed European settlers to build economies in Tahiti, Tonga, Samoa, and Fiji, the islands with the highest exports of goods.

In this time period, the Pacific began to draw in European governments once again. James Cook, a British explorer, embarked on his first Pacific voyage and reached Tahiti. Although he encountered the island first, France later colonized Tahiti, becoming the first colonizer of a Pacific Island nation by a European power. Later, the British were able to colonize Fiji.
The growing attention of the Pacific allowed for numerous visits. Painter Paul Gauguin visited Tahiti, inspiring many of his artworks, including the 1891 painting Vahine no te tiare (Woman with a Flower). Japanese businessman Mori Koben settled in Chuuk, now part of the Federated States of Micronesia, becoming the first Japanese immigrant in a Pacific Island country. 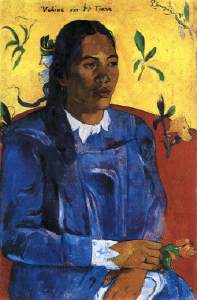 The need for more land caused discourse, battles and wars between European powers over territories, and in the epicenter was in the Pacific. The first instance was in 1898, when the United States and the Kingdom of Spain began fighting over the Pacific territory of Guam, later leading to the Battle of Guam. Guam, initially under the Spanish control, surrendered without resistance and the island passed into American control, where it still remains today.

The Battles of Midway, Guadalcanal, and Saipan during World War II all occurred in the Pacific Islands, and became significant to their history.
During World War II, the Pacific became grounds for testing, as countries began testing nuclear bombs on their islands. The United States started to test nuclear bombs on Bikini Atoll in the Marshall Islands, and later, France started to test similar devices on Mururoa Atoll in French Polynesia.
International diplomacy became involved in resolving land distribution issues in the Federated States of Micronesia, a former German territory. The nation became a part of the League of Nations mandate under Japanese administration, and then under the administration of the United States, a U.N. Trust Territory.
🎥Watch: WHAP - World Wars in World History

Independence in the Pacific

During the 19th and 20th centuries, European settlers transported laborers from other countries, predominantly from India and China, and European administrators to assist with the production of a Pacific economic market.
As a result of the commercial industry established in these islands after independence, there was an exploitation of forests in Fiji, New Caledonia, New Zealand, Papua New Guinea, Solomon Islands, Samoa, and Vanuatu to make timber, sawn wood, and wood products for export. Minerals came in a limited quantity in islands, such as New Caledonia, New Guinea, and New Zealand.
The annual earnings of most countries in the Pacific Islands far exceed exports. Tourism and remittances are the key sectors that eliminate any trade deficits collected. Major exports of these Pacific Island nations include frozen or canned fish, minerals (mainly phosphate from Nauru), copra, cocoa, and spices, most of which are sent to Japan, France, the United States, and Australia.
Tourism has improved the economies of French Polynesia, Guam, Hawaii, Fiji, and New Zealand, causing other Pacific Island nations to invest more into their tourism sectors. Most Pacific Islands, which are still overseas territories of European nations, receive budgetary and development aid, while the smaller independent island states receive aid from Australia, New Zealand, Japan, the United Kingdom, and the United States.