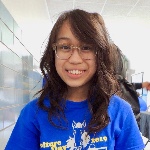 Keep up with all of Fiveable's content (trivia, live streams, and guides) at our AP Biology hub!

In every plasma membrane lies a structural framework of different components with significant cellular functions, making up a mosaic known as the fluid mosaic model. According to this model, the cell membrane represents a fluid structure comprised of proteins within a phospholipid bilayer. Ever since two scientists, S. J. Singer and and G. Nicolson, proposed this accepted theory about the membrane, the complexities behind fluid mosaic model still encapsulate ever-expanding topics of research to this day.

Proteins of the Membrane

Embedded within the hydrophobic interior of the plasma membrane’s lipid bilayer are integral proteins. A heavy majority of these are known as transmembrane proteins, which cross through the entirety of the membrane一both the core of hydrophobic tails and exterior of hydrophilic heads. However, in some cases, other types of integral proteins only span partially into the phospholipid bilayer.

In terms of the composition of an integral protein, there consists of different features that distinguishes its hydrophobic from its hydrophilic parts. Within an integral protein’s hydrophobic areas (which lack an affinity for water), there are different polypeptide chains of nonpolar amino acids. These stretches of amino acids are normally coiled into alpha-helical structures, each of which comprise of hydrogen bonds. As for an integral protein’s hydrophilic parts (which have an affinity for water), these regions have exposure to the extracellular aqueous fluid surrounding the cell’s membrane. 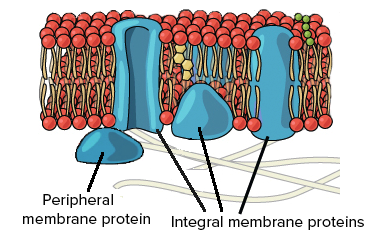 Proteins have specific functions that contribute to the plasma membrane’s ability to sustain the cell’s internal and external environment. One of its primary specializations is the transport of molecules both towards and against its concentration gradient. For instance, proteins can act as hydrophilic channels, which allow specific substances (that cannot diffuse through the hydrophobic cores) to pass the membrane. Other proteins, known as carrier proteins, can change their shape bring proteins to the other side of the membrane.

Proteins within the plasma membrane often function as enzymes, which aid in the speeding up of chemical reactions for specific substances. Because an enzyme’s its active site in the membrane is exposed to an aqueous solution, it can gain the ability to perform essential metabolic processes for the cell.

Along with their role in enzymatic activity, membrane proteins serve as primary sources of connection between other vital components of the cell. For instance, proteins embedded in the membrane can attach to parts of the cytoskeleton, including microfilaments. Not only would this enable for the sustenance of a functional cell shape, but it would aid in the stabilization of these proteins within their designated location as well. In addition, some membrane proteins hold the ability to bind to molecules of the extracellular matrix, enhancing the cell’s ability to regulate activities on both the extracellular and intracellular level.

Another function, intercellular joining, represents a role that the membrane proteins of neighboring cells can carry out. During this process, the proteins can attach to one another in the form of different junctions. Such can including gap junctions, which enable for cell communication through cytoplasmic channels, along with tight junctions, which prevent extracellular fluid from leaking due to its closely packed nature.

Signal transduction encapsulates a significant function that enables messages to be sent to the cell, inciting a specific response that regulates a certain activity. Within this process, a membrane protein can represent a receptor, which has a binding site shaped in a particular manner. This specific shape fits together with an external signaling molecule, known as a ligand, of a certain shape as well. As the binding between the receptor protein and the chemical messenger occurs, the protein itself may alter in shape, resulting in the communication of the message to the cell and a final cellular response. 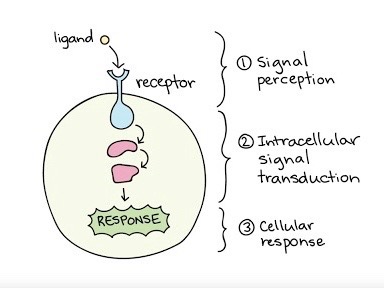 Not only do proteins contribute to the essential functions of the cell membrane, but carbohydrates hold an integral role within the fluid mosaic model as well. Carbohydrates play a major hand in cell-cell recognition, which involves one cell’s capability within pinpointing a one cell versus another different cell. Many molecules on the plasma membrane side that faces the extracellular fluid comprise of these carbohydrates, enabling cells to bind to these molecules to help detect other cells. 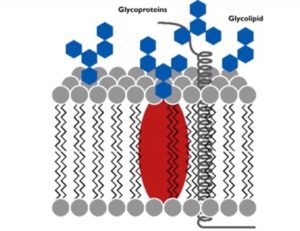 In addition to proteins and carbohydrates, steroids represent cellular components that are essential to the regulation of the cell membrane’s activity. Most notably, located in between the gaps of hydrophobic phospholipid tails is cholesterol, a steroid vital to controlling the fluidity of the membrane. Depending on the temperature of the environment surrounding the cell, these steroids play a certain role to sustain a fluidity necessary for proper cellular functionality.

When a cell is located in an environment of a high temperature, there is expected to be increased movement (kinetic energy) throughout the hydrocarbon tails of the phospholipid bilayer. However, cholesterol molecules serve to counteract this by restricting this movement of the tails. Within the human body, especially due to its high internal temperature of 37 degrees Celsius, the steroid cholesterol stops the presence of too much fluidity in the cell’s phospholipid bilayers.

On the other hand, cholesterol also serves to prevent the detrimental solidification of the cell’s membrane. If the phospholipid bilayer of a cell were to solidify, the permeability of the membrane, along with the activity of its enzymes would drastically decrease. Therefore, by preventing the phospholipid tails from closely packing, the cholesterol helps lower the temperature necessary for the cell membrane to solidify. 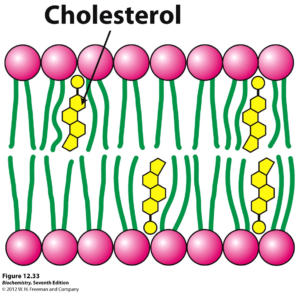 With its various molecular components, one could say that the fluid mosaic model encapsulates a tapestry of integral team players. The mosaic, comprising of different proteins with specialized functions, is vital to maintaining a functional environment on both the extracellular and cytoplasmic sides of the plasma membrane. Not only do proteins hold ownership of significant cellular roles, but components such as cholesterol and carbohydrates do as well.

Though a vast realm of knowledge of the fluid mosaic model has already been uncovered, the model’s extensive intricacies represent a constantly expanding topic of research today.