3.2 Art as a Challenger of Perspective

Unit 3: Influences of Beauty and Art

This unit guide will explore how beauty and art🎨 influences quality of life and values in Spanish-speaking communities.

3.2: Art as a Challenger of Perspective

Art has long been used to challenge the mind🧠🤔 of the viewer. It can make you feel empathy and step into the shoes of another. It can teach you something you had never seen or experienced before. It can open you up to a whole new perspective👓.

Propaganda has long been used during wartime to communicate messages with a focus on including artistic flare. For many, the term propaganda has a very negative connotation because some of the primary users of propaganda did so to communicate very controlling, negative messages.
Francisco Franco, dictator of Spain🇪🇸 from 1936-1975, had propaganda distributed during his regime. Below are two examples from Spain during the Spanish Civil War (1936-1939). The first was recruitment for international communist volunteers to support the communist war efforts. The second has Franco depicted in the lower right corner wearing his military uniform and a fur overcoat and a crest in the lower-left corner stating "la guerra ha terminado" the war has finished.
These examples use symbolic imagery and color to convey specific messages to the public in order to enforce certain ideals and cause some to conform their personal perspective to that of the ruling force. 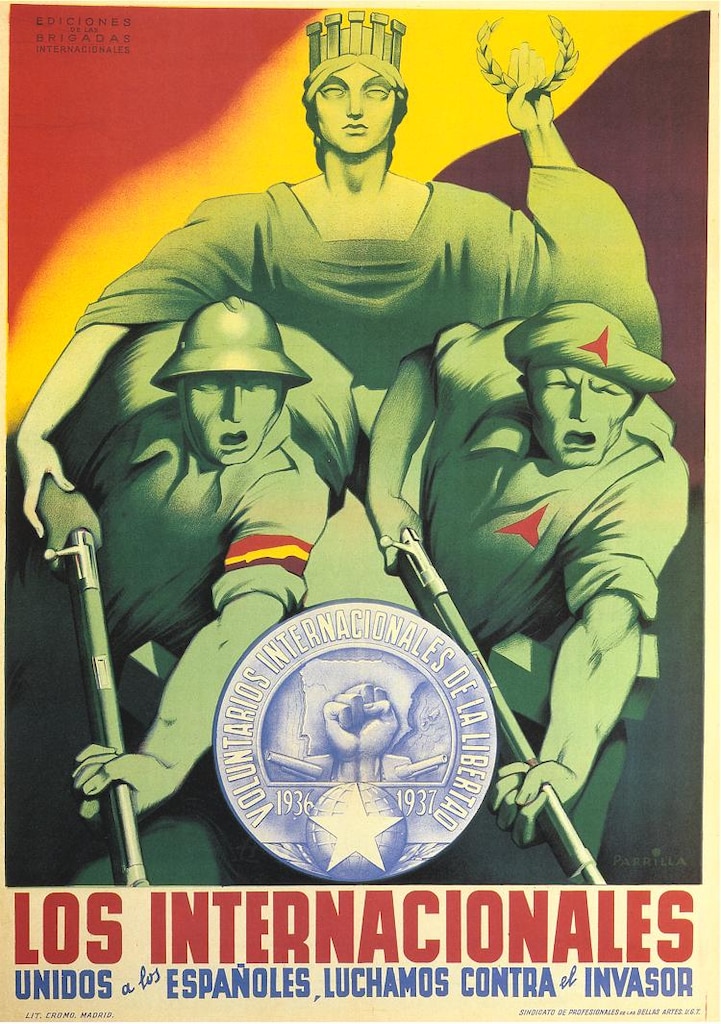 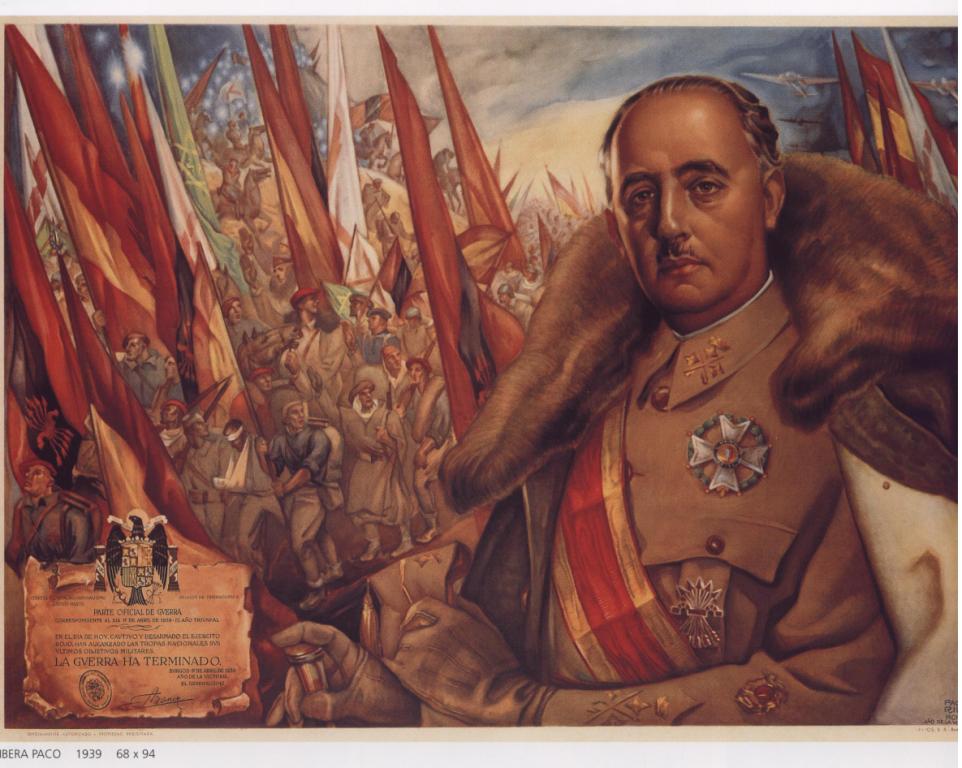 Image from ideologicalart.com.
Fidel Castro, Prime Minister (1959-1976) and then President (1976-2008) of Cuba🇨🇺, was also known for his extensive use of propaganda as a control tactic during his communist reign. Billboards and graffiti were displayed throughout Cuba🇨🇺, promoting Castro's ideology. He was an anti-capitalist and a major player in the Cold War.
The two examples below come from Cuba. The first, a billboard, shows Castro on the left and famed revolutionary leader Ernest 'Che' Guevara with a quote "Vale, pero millones de veces más, la vida de un solo ser humano que todas las propiedades del hombre más rico de la tierra" above various examples of Cubans in the workforce. The second image is another billboard, a common type of contemporary propaganda, denouncing the blockade🚫 the United States🇺🇸 imposed on Cuban trade by using a visual representation of the iconic Uncle Sam symbol being punched by a fist labeled "Cuba" and the word "bloqueo" falling apart underneath. 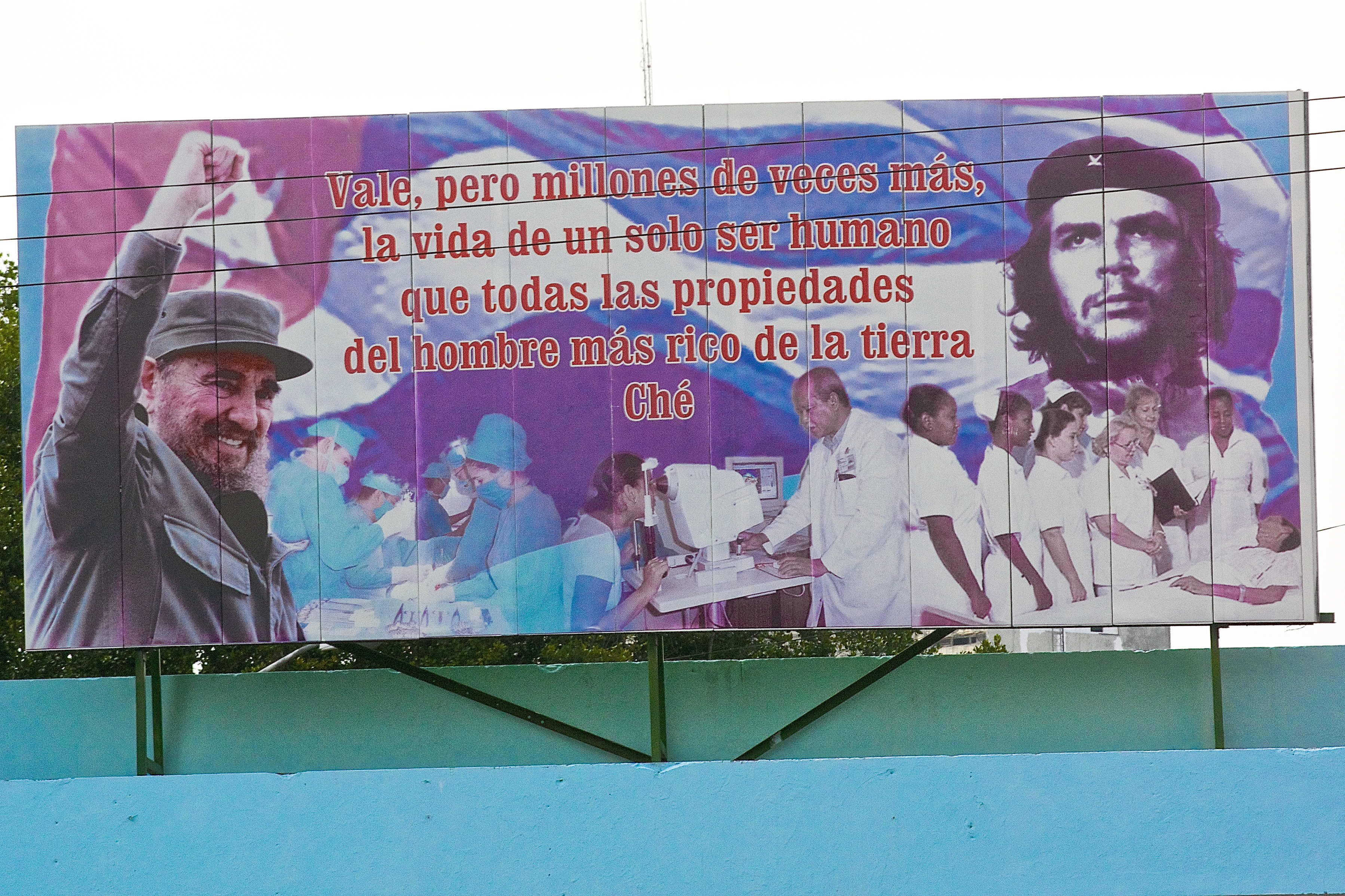 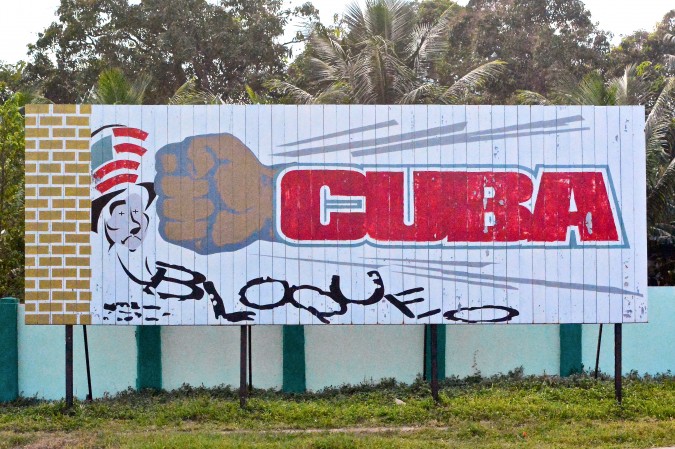 Music as a Challenger

Music🎵 is a dominating artistic force in challenging the perspective of the public. Some singers🎤 are passionate about saving the planet🌎 while others have a strong distaste for certain political parties or leaders. Since the 1980s, the addition of music videos to the artistic process has allowed artists to show some of their thoughts in a visual format along with the audio.
Below is the music video for Selva Negra from the Mexican🇲🇽 rock group Maná. The lyrics of the song are environmentalist in nature. Through the lyrics, they push listeners to consider saving the rainforest. A year after this song was released, a non-profit organization of the same name was created with the goal of natural preservation and conservation.
📹 https://www.youtube.com/watch?v=uklKoF1PyHM
The following song, Latinoamérica by Calle 13 at first glance looks like a commemorative anthem celebrating Latin American culture, but in digging deeper you will find anti-government sentiments.
📹 https://www.youtube.com/watch?v=DkFJE8ZdeG8
Again by Maná, the song ¿Dónde jugarán los niños? pushes listeners to consider the future of the Earth for the sake of the children. If the Earth🌎 isn't cared for now, where will they play?
📹 https://www.youtube.com/watch?v=_rFRVwOV-hs

Installation and performance art has grown in popularity recently by groups who have experienced oppression of some form. By creating large, in-your-face pieces of art, the artist is able to challenge the perspective of many onlookers at once and use it as part of the fight for reform.
Mexican artist Elina Chauvet created an installation art piece titled "Zapatos Rojos" where she places pairs of blood-red shoes👠👠 in a public square. The original piece included 33 pairs of shoes and as the installation travels city to city it now has more than 500 pairs of shoes. 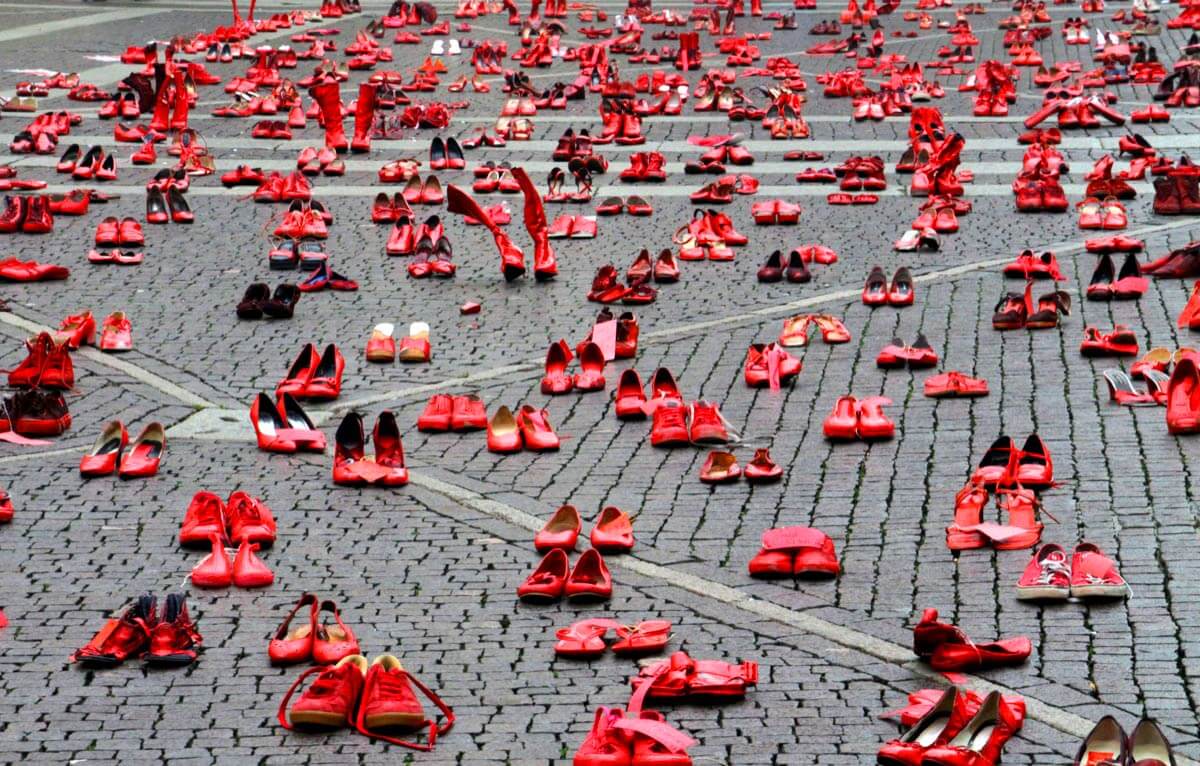 Image from Distrito Arte.
The following mural by Yreina Cervántez is located in Los Angeles, California. It was created to commemorate the Chicano civil rights movement during the 1960s and 1970s.

Image from Vincent Price Art Museum.
In Chile🇨🇱, women have taken to the streets in protest and chant while performing a song against sexual violation of women♀️. Their performances have ignited replications of the performance across the globe🌎.
📹 https://www.youtube.com/watch?v=Bgmq3BpKNvc

FREE AP spanish lang Survival Pack + Cram Chart PDF
Sign up now for instant access to 2 amazing downloads to help you get a 5
Join us on Discord
Thousands of students are studying with us for the AP Spanish Language exam.
join now
Browse Study Guides By Unit
🙏
Exam Reviews
👨‍👩‍👧
Unit 1: Families in Different Societies
🗣
Unit 2: The Influence of Language and Culture on Identity
🎨
Unit 3: Influences of Beauty and Art
3.1Definition of Beauty in Daily Life
3.2Art as a Challenger of Perspective
3.3How Communities Value Art
3.4How Art Records History