On the recommendations of many skilled world history teachers I recently read the fourth edition of Robert Marks's The Origins of the Modern World. My review on Goodreads is succinct and reflects this context: "believe the hype." The book emphasizes the role human-environmental interactions in shaping the modern world, while narrating a truly global history of the Early Modern period (c. 1450 - c. 1750 CE). It is an excellent resource for AP World History teachers and students, and insights from it could  improve how we teach and learn about the Modern World.l history. At Fiveable, we are committed to an inclusive and comprehensive history of our World and we will take our cues from World Historians, including Marks, as we review this period in the weeks ahead.

The Hidden Dangers of Causality

World history must be global history. But, Western Civilization and European History have often stood in for World History, either literally or as a framework. In my experiences teaching high school history for nearly thirty years in two large school districts, World History courses structured around a Western Civ framework often present history as a set of important events tightly linked by causation, although this understanding of causation is not essential to European history as an academic inquiry. Such causal frameworks perpetuate a view of history that geographer and anthropologist James Blaut termed the “European tunnel of time” (quoted in Dunn, Miller, and Ward, “Introduction,” 2).  It is not just that the events are European, but that they are understood as pieces in an unbreakable chain.

In an essay in The New World History: A Field Guide for Teachers and Researchers, Gilbert Allardyce elaborates on this understanding of history in traditional Western Civilization courses:

“Many of us,” explained Eric R. Wolf “even grew up believing that this west has a genealogy, according to which ancient Greece begat Rome, Rome begat Christian Europe, Christian Europe begat the Renaissance, the Renaissance the Enlightenment, the Enlightenment political democracy and the industrial revolution.” This was not only the history that most westerners knew, it was their perception of the nature of history as well--it’s oneness, linear direction, and progressive movement.  Incapable of transcending European experience, they were also incapable of so-called global perspective (“Toward World History” in Dunn et al, 51).

Every history teacher who has been in a curriculum meeting where a colleague insists that some development, such as the Renaissance, must be covered in order for students understand another, such as European maritime empires, has witnessed this thinking. Such a view of history is at odds with the practice of professional historians who stress the contingency of historical events and the agency of historical actors.  We should emphasize these nuanced treatments of causality in our World History classes. 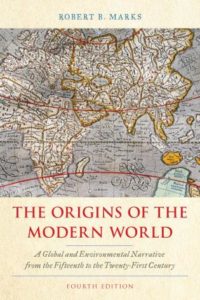 Cover of Marks, Origins of the Modern World, 4th ed.

An Age of Oceanic Voyaging

The issues above are very relevant to teaching and learning about transoceanic connections in the Early Modern Period, labeled Unit 4 in the course and exam description for the new AP World History: Modern. Robert Marks begins the second chapter of The Origins of the Modern World by considering these connections, specifically the significance of the voyages of Christopher Columbus in 1492 and Vasco da Gama in 1498:

Eurocentric interpretations tend to see them as major steps taken toward the inevitable rise of the West. Some, on the other hand (myself included), think it is important to place those voyages of discovery in a broader global context of the real structures of wealth and power in the world around 1500. From that perspective, the Indian Ocean can be seen as the most important crossroads for global exchanges of goods, ideas, and culture with China, Indian, and the Islamic near and middle East meeting there as the major players. The map on this books by the European Gerardus Mercator makes that point forcefully by placing the Indian Ocean at the center of his map. From the perspective of the Indian Ocean world Europe was a peripheral marginal player trying desperately to gain access to the sources of wealth generated in Asia. (43)

Marks explicitly pushes back against the notion that the story of the world from c. 1400 CE to c. 1800 CE (taking a longer view of early modernity) can be summarized as the rise of the West. He persuasively argues that China and India stayed at the center of the world economy until c. 1800, and that the participation of Europeans in this lucrative trade was contingent on the Spanish discovery of silver in the Americas. His reasoning should inform how we talk about this period in World History classes. I suggest two interventions.

Pan Out to Keep It Global 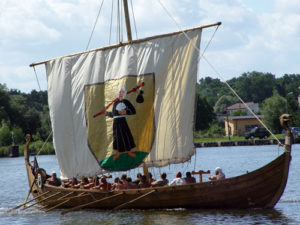 Whenever our attention is focused on one region in a World History class we should take a moment to expand our focus in time and space. In the case of European maritime reconnaissance, we should consider how this is part of larger, global growth in long distance seafaring. Once history teachers referred to an Age of Discovery, now we are more likely to say Age of Exploration, but ultimately we are talking about sailing. We can discuss the voyages of da Gama and Columbus along with Zheng He, the Vikings, and the Polynesians.  Not only were Polynesian wayfinding and Viking crossings of the north Atlantic very impressive, but they belie the notion that specific maritime technologies were the only important factor.

These technologies did expand the range of European sailors, of course. But, students should be aware that these technologies, such as the compass, had histories from across Afro-Eurasia before c. 1450. As maritime historian Lincoln Paine observed on Twitter, Iberian sailors were part of a broader Mediterranean world

Mariners shared information in ports around the wider Mediterranean including Lisbon and Seville, and some actively sought it out. But at the time there was no central clearinghouse of nautical information like Spain's Casa de la Contratación (1503). — Lincoln Paine (@LincolnPaine) December 2, 2018

Paine made this point on Twitter while pushing back against over emphasis of the personal significance of the Portuguese Prince Henry "the Navigator." As is most often the case in World History, exchange networks were of paramount importance. This is also an example of how maintaining the same level of detail across regions can keep our courses balanced and global. For instance, Vasco da Gama and Zheng He justifiably receive equal emphasis in many World History classes, and the details of the events leading up to their voyages merit similar treatment. A search for clear causes can lead us down rabbit holes that make it more difficult to keep the big picture in mind. One intervention is to consider whether developments such as the Ottoman conquest of Constantinople are better thought of as context than as causation.

Portuguese maritime expansion also provides a lesson in the need to recognize the limits to the effects of The expansion of European maritime empires is clearly one of the most important developments in the early modern world. But, like many topics, it is important to avoid overstatements that obscures important continuities and other changes. As renowned World History educator Bram Hubbell observes, there was a lot going on in the Indian Ocean.

A3: And then I love talking about the Ottomans in the IO to make things even more complicated. It's not just Europeans arriving! #whapchat pic.twitter.com/N8VSbgh837 — Bram Hubbell (@bramhubbell) March 29, 2017

Click through to Bram's tweet to see a map showing battles between Ottoman and Portuguese forces. Armed Portuguese trade in the Indian Ocean was clearly significant, but it was also contested. In The Story of Swahili John Mugane describes how Omani and Swahili forces expelled the Portuguese from fortresses north of Mozambique in the 1700s (97). British and Dutch imperialism in the region proved to be more durable, but here teachers need remember that the East India Companies were established half way through the period in questions, c. 1600 CE, and did not achieve dominance the eighteenth century. British interests were unable to force China to open trade until after 1800.  Emphasizing the phrase "trading-post empires" is one way to show students that European influence grew but was not hegemonic in the Early Modern period.

Now is the time to think critically about the past

The discussion above involves just one of the major topics in the new Units 3 and 4, but is meant to suggest ways of looking at the Early Modern.World. Now more than ever World History teachers and students need to consider such approaches to the past. In a world in which resurgent white nationalists deploy simplistic notions of the past as arguments for exclusion and hatred our students need to see that the past was complex, that it featured important actors with a variety. The world that we live in now was not inevitable and neither are any of our possible futures.

The discussion above involves just one of the major topics in the new Units 3 and 4, but is meant to suggest ways of looking at the Early Modern.World. Now more than ever World History teachers and students need to consider such approaches to the past. In a world in which resurgent white nationalists deploy simplistic notions of the past as arguments for exclusion and hatred our students need to see that the past was complex, that it featured important actors with a variety. The world that we live in now was not inevitable and neither are any of our possible futures.

More narrowly, the shrinking time frame of AP World History means that teachers and students need to consider the narratives used to explain the emergence of the modern world. As authors and historians Dave Easton (World History through Case Studies) and Eric Nelson (co-author, Ways of the World) pointed out in their presentations to the recent conference of the Midwest World History Association, teachers need to be wary of filling the space made available by  the shorter  time frame of with details from the Eurocentric, legacy curriculum with which most teachers are more familiar from their own educations and state standards. Instead, we should seize this opportunity to take the time to engage students in discussions of contingency and complexity in World History.

I will be discussing the ideas in this article on Wednesday, October 9 at 8pm Eastern in a live review here on Fiveable: Keeping It Global in Early Modern World History. This review will be free and interactive event. Please please join me and share your thoughts. It is listed under "Professional Development," but students, teachers, and history enthusiasts are all welcome. Click here to see upcoming live reviews from the talented team of AP World streamers.