How to Write the AP World LEQ 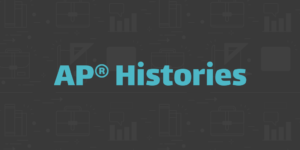 Choosing which long-essay question to write will be one of the last major decisions that students make for AP history this year. If a student understands all of the prompts, they should choose the topic for which they can think of the most  evidence. The reason for focusing on evidence first is simple: Three is greater than two.

As I mentioned on in my May 2nd stream "Breaking Down the LEQ (replay on 🎥 the World History page) quality paragraph based on evidence can net three points on the LEQ, which will certainly be near and probably be above the average score. A quality introduction, whether in one paragraph or two, can earn two points, one for thesis and one for context. Students should go for all five of these points if time allows, of course. But, I recommend drafting the body paragraph first, even though students will probably start their essay with a thesis and context, if they have time.

Looking at least year’s LEQ (on the last page of the Free-Response Questions), differences in evidence points accounted for more than half of the difference in the average scores of questions two (0.9/1.8). Three (1.7/3.0) and four (1.3/2.4). Generating the most evidence possible is a key to maximizing students' LEQ scores. Not only will using two pieces effectively set up a base score of 2-3 on the LEQ, but using more evidence will help a student with contextualization and maybe even complexity.

The evidence point is usually the easiest to earn for the LEQ, and prepared students can double that point by explaining how their evidence supports an argument related to the prompt. Consider LEQ #2 from last year’s AP World History exam:

“In the period c. 600 BCE to c. 600 CE, different factors led to the emergence and spread of new religions and belief systems, including Buddhism, Christianity, and Confucianism”

Here, an argument related to the prompt will involve a religion or religions and/or a factor related to them. A student could start by thinking about how religions emerged and spread, and then get specific. In order to function as evidence, facts need to be specific and relevant. For instance, with this question a student might start by identifying a religion and then considering how it emerged or spread. For instance, thinking about Confucianism, a student might remember that it began in China. “China” would not count as evidence, but something more specific, such as the Warring States Period or the Han Dynasty, would. Simply writing “The Han Dynasty in China supported Confucianism” is specific and accurate enough to count as one of the two required pieces of evidence. Next, the student would determine how or why the Han Dynasty did this, perhaps by explaining that Confucianism was an element of cultural unity supported by Han Emperors.

The student would then generate additional examples from the same religion or another. For example, they identify Christianity’s emergence and spread in the Roman Empire. Naming the Roman Empire is probably not specific enough, though it might count as context, but something specific from the Empire, such as Constantine, the Edict of Milan, or Christian martyrs would work. The student could combine these examples and their explanations into one paragraph. If the second piece of evidence is one another factor, such as trade routes, then the student has the basis for two smaller paragraphs.

Such a paragraph or paragraphs would yield a third point if the student demonstrate historical reasoning. This has two parts: showing historical thinking (causation, comparison, or analysis of continuity or change) and providing a reason. With question #2 above this requires explaining how something, such as empires, caused religions to emerge or spread. Writing “Empires caused religions to spread” is not enough, but “Religions spread within imperial societies, because some empires encouraged people to practice a particular religion in order to unite their society” would earn the point. Christianity in late Imperial Rome and Confucianism in Han would be evidence in support of this argument.

Once a student has drafted examples to be used as evidence and has an idea of how to demonstrate historical reasoning, they can either write it up or, if time allows, first write a thesis and contextualization. For more on thesis and contextualization see Kris Clancy’s excellent session (watch the replay on the 🎥 Skills Page). Although they might write a thesis at the top of the essay, students can benefit by designing their response from the inside out: evidence first. Moreover, students who are almost out of time after writing their DBQ should consider writing one good body paragraph with evidence and reasoning, and thus earn three valuable points.