What Memes Are Perfect for AP English Literature?

Bookmarked 5k • 128 resources
See Units
Sometimes you just need a break from reading 19th-century novels and want to read some funny memes about the characters' stupidity instead. Welcome! You have come to the right place! Looking at funny memes can be both educational and enjoyable, and this compilation will feature popular pieces of literature you will likely read for AP Literature and Composition. I will do my best to avoid spoilers for books, or I'll indicate if there is one. 📖⚠️ 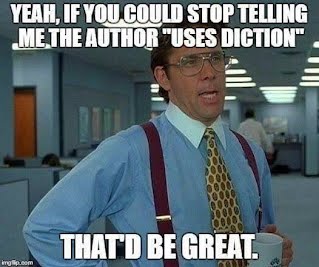 That's right, we are going in for the kill right away with this one. This is something that every single AP Lit student needs to hear. This comes up in the analysis essays (one dedicated to poetry and the other to prose) when students will analyze how the author wrote the piece of literature effectively. Many students will often want to discuss the intentional word choice, but often do not execute this well.
By saying the author "uses diction" is to say the author is using words. Of course, the author is using words, that's how communication works. This often feels like a cop-out answer and often will not earn students any points within the essay.
However, that doesn't mean that intentional word choice is not a valid response, because most of the time there is a lot to say about how the author uses diction to establish a tone or mood throughout the piece.
Rather than saying "the author uses diction throughout the work," elaborate on that thought more to build your overall argument. Something along the lines of "the author uses more mysterious diction to establish a darker tone throughout the passage." This is more specific to the passage, and it is often easier to find specific text evidence to support it, rather than a more generic "the author uses words". 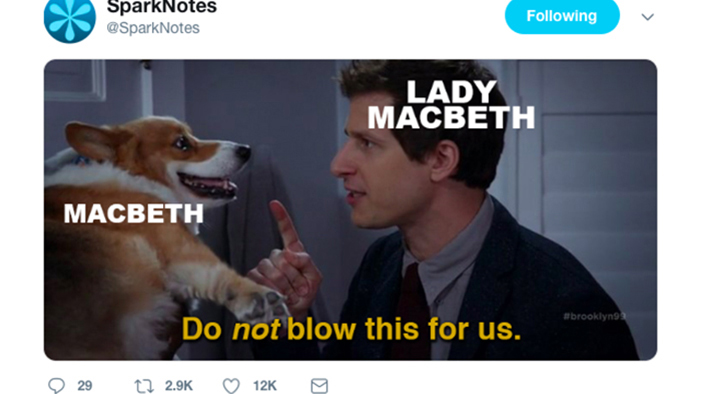 If only Macbeth was actually this cute! Image courtesy of Sparknotes

Note: this explanation contains spoilers for Shakespeare's Macbeth
If you've read Macbeth before, this will likely make sense. If not, that's fine too! I am going to talk about multiple plot points throughout this explanation, so if you would like to avoid spoilers for this play feel free to move on to the next meme!
In the second act of Macbeth, the wife Lady Macbeth influences the main character to kill the king to assume the title for himself. After doing the dirty deed, Macbeth's guilt haunts him, but Lady Macbeth keeps her cool. Once people find the dead king in his chambers, rumors start to spread about what might have happened.
Macbeth, guilty and not covering it well, does his best to seem cool, calm, and collected. Lady Macbeth is totally normal and trying to keep her husband under control. That's where this meme comes in. Lady Macbeth wants the power her husband would assume as king, so they have no leeway to get caught and found guilty.
However, this entire thing becomes ironic near the end when Macbeth kills even more people and the Lady Macbeth literally loses her sanity. In Act V she has a nervous breakdown, talking about scrubbing the blood that won't come off of her hands. It is her guilt that kills her shortly after. Macbeth dies shortly after as well, killed by Macduff.
Macbeth is a wild ride of a play, and I love the irony that, in reality, it was Lady Macbeth that blew it for them, even though she was doing so well at the beginning of the play. (Also, there's a cute dog in the meme, and that's always a plus!) 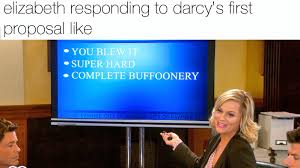 I don't think things worked out this time. Image courtesy of SparkNotes

Note: this explanation may contain spoilers for Pride and Prejudice.
Mr. Darcy might be one of the most iconic literary characters of all time. It is no secret that Mr. Darcy is not what Elizabeth imagined in a man, his quick and harsh judgments come off as a bit too proud for Elizabeth's taste.
He proposes to Elizabeth, but instead of flattering her, as most marriage proposals might, he instead focuses on how his status is a bit too elevated than that of hers, and how that she likely does not deserve a man such as himself.
Understanding the context of that (first) proposal, it is a bit more understandable how Elizabeth might react (in a 21st century way) as "You blew it, super hard, complete buffoonery." It will not surprise you that she rejects him.
Fortunately, we see some character development in Mr. Darcy throughout the novel as he continuously proves his devotion to Elizabeth, and even uses his status to protect the Bennett family despite their "low connections."
It is only after he proves his worth to Elizabeth that she accepts his proposal and realizes that her prior judgment of him may have been a bit harsh. What an adorable example of character development! ♥️ 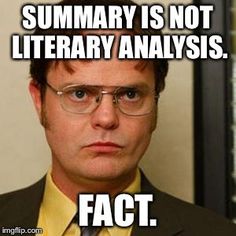 Dwight is not happy with you for confusing the two. Image courtesy of imgflip

Note: This explanation contains spoilers to 1984.
Oh, Dwight. You always have to come for the students that try to sneak in a little too much summary in their analysis. Not everyone can be perfect like you, Dwight. But we can try 😔
In all seriousness, this meme is making some points. Analyzing literature is very different from regurgitating a summary. Summaries simply outline what happened; the major plot points, tonal shifts, character arcs, etc.
Here's an example of a summary:

In 1984, the main character Winston Smith defies the Thought Police by writing in a diary, pursuing an affair with Julia, and attempting to join a rebellion against Big Brother. Big Brother then catches, tortures, and reverts Winston and Julia into obedient citizens.

That's great and all, but the analysis delves into why any of that actually matters.

When the reader is first introduced to Winston Smith, he seems content in his life, other than the fact that he is writing in a diary, which he recognizes as an act of rebellion. As the novel continues, we see Winston become gradually more and more rebellious against the Party until the Thought Police catches him. O'Brien tortures him, a person who he once thought was like him until Winston truly loves the Party again and is ready to believe whatever Big Brother tells him as the undeniable truth.

This kind of failed character arc really emphasizes the effectiveness of the setting, and the point George Orwell made when writing this book, that, in reality, an extreme of anything is harmful. In the case of 1984, he focuses on the issues of high levels of control on citizens and how the use of media can manipulate them.

Meme #5: The Elephant (Ostrich? Monster?) in the Room 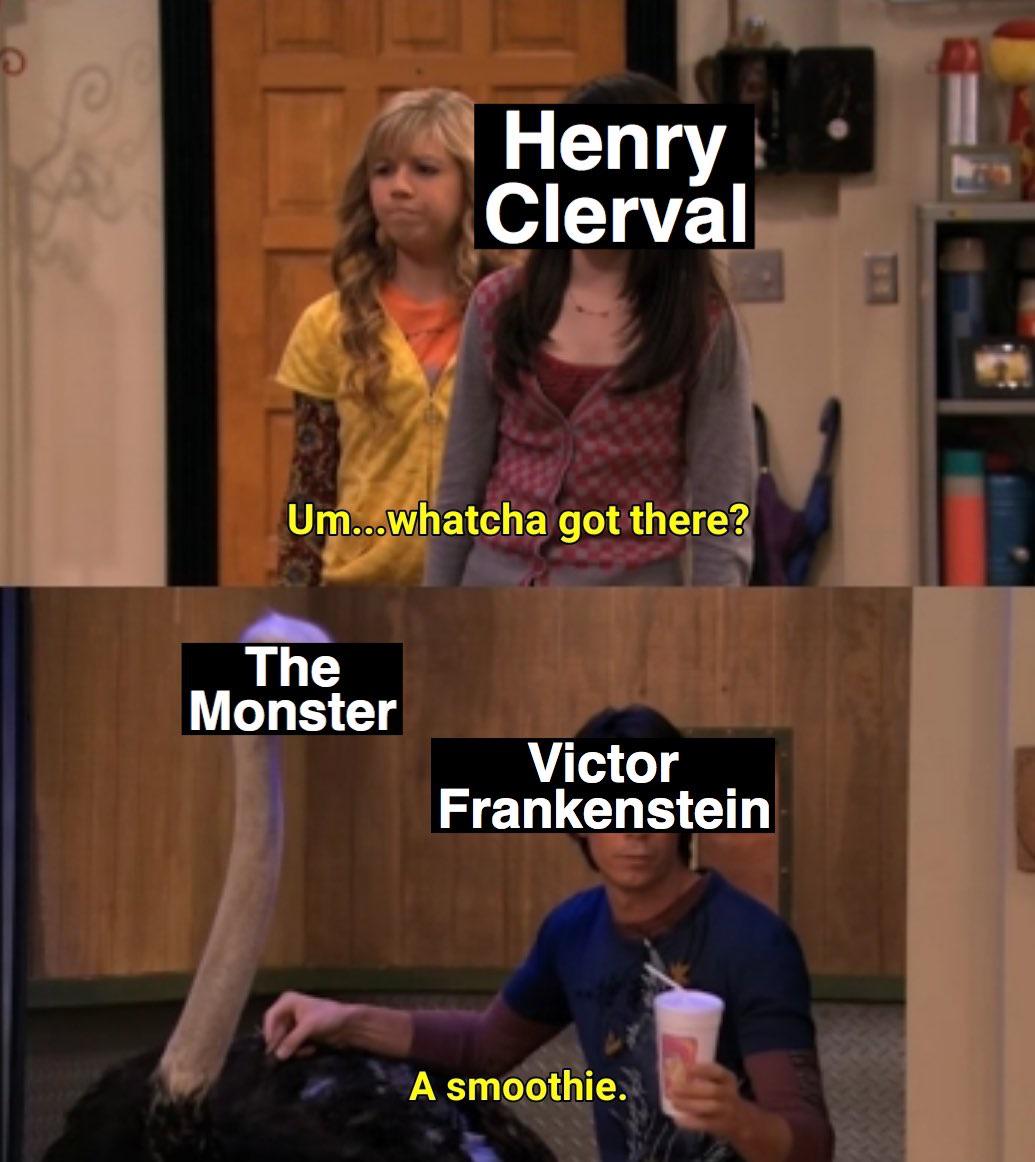 Maybe if we just ignore it, it will go away. Image courtesy of Reddit

Note: this explanation contains spoilers for Frankenstein.
Personally, I can't decide which was more problematic: Victor's decision to create human life unnaturally or his decision to just ignore it after creation. This meme shows the latter.
Victor decides he wants to have a legacy for something extraordinary, so he finds human body parts and sews them up and creates a gigantic unnatural scary-looking monster thing. And then promptly ignores it, which really is what causes every single subsequent problem in the novel. This meme shows exactly that.
Henry Clerval, Victor's closest friend, had worries about Victor's wellbeing throughout the entire process of the creation of the monster, and then once Victor completed the monster, he just decides to entirely ignore the elephant in the room once Henry tries to address it.
Victor then continues to ignore that same elephant throughout the entire novel. Which leads to his own demise. Yeah, Victor, drink that smoothie instead of caring about the well-being of everyone you've ever loved. Ignore that monster. Go you. (If you learn anything from Mary Shelley's Frankenstein, it's that ignoring your problems won't make them go away, but will oftentimes make them worse.)

Whether this was an introductory post to AP Lit as a whole or a fun study break, I hope you enjoyed this compilation of literary-themed memes.
Remember to:
For some extra resources, check out the Fiveable AP Lit hub!