You probably took CompGov so you would understand the memes. Kidding...but seriously if that's why you took it, that's okay. You do you! Some people like memes about TV shows, others like memes about school.
🚨 Quick note: we credited the creators of all of the memes and Tweets in this article. Go show them some love!

If you know about Russia's record of controlling the media... 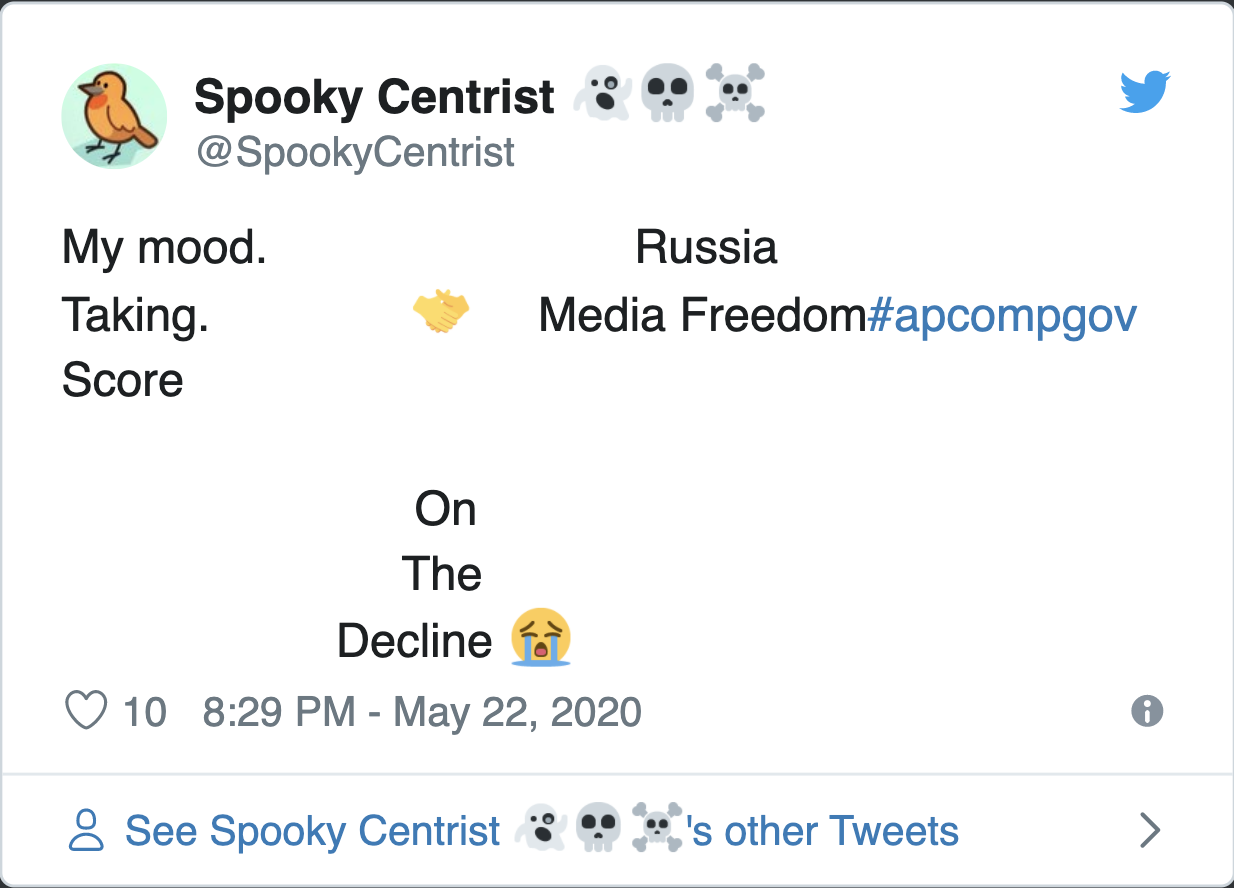 Before I say anything else, F in the chat for online AP tests... Anyways, let's talk about Russia and media freedom. Or, really, the lack of media freedom in Russia.
Russia has a long history of silencing journalists and controlling (and censoring) media outlets. As recently as 2014, Russia passed laws that increased state control of the media, and the state also owns all but one of Russia's national TV channels.
You might be thinking "there's gotta be independent local news channels, right? 🤔" Yeah, good train of thought there, but you're not gonna enjoy hearing about self-censorship. It's pretty much where media outlets avoid talking about controversial topics that could upset the political establishment (aka topics that criticize Putin and/or the government).

If you know about countries not prioritizing their military in their budget... (this couldn't be America 🙃 )... 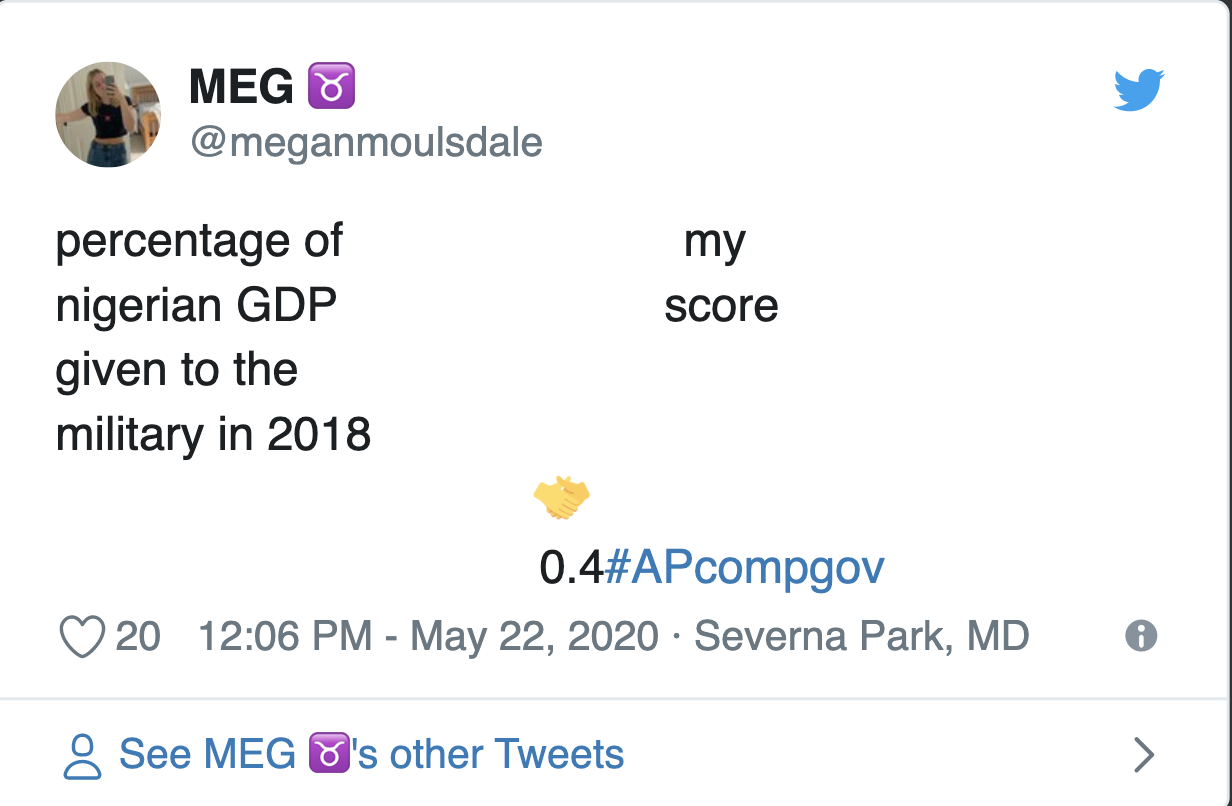 Look, I can't say a lot about how this person's AP test went...but I do know a bit about Nigeria's military budget. Long story short: there's not a lot of it. As a percentage of GDP, military spending only made up a measly 1%.
That doesn't mean that the military is completely powerless and ineffective, though. After all, military dictators have led Nigeria many times in its history. Currently, the Nigerian military is one of the most powerful forces on the African continent, and its elites have illegally distributed resources on ethnic or religious grounds.

If you're an American taking CompGov or already took AP GOPO ... 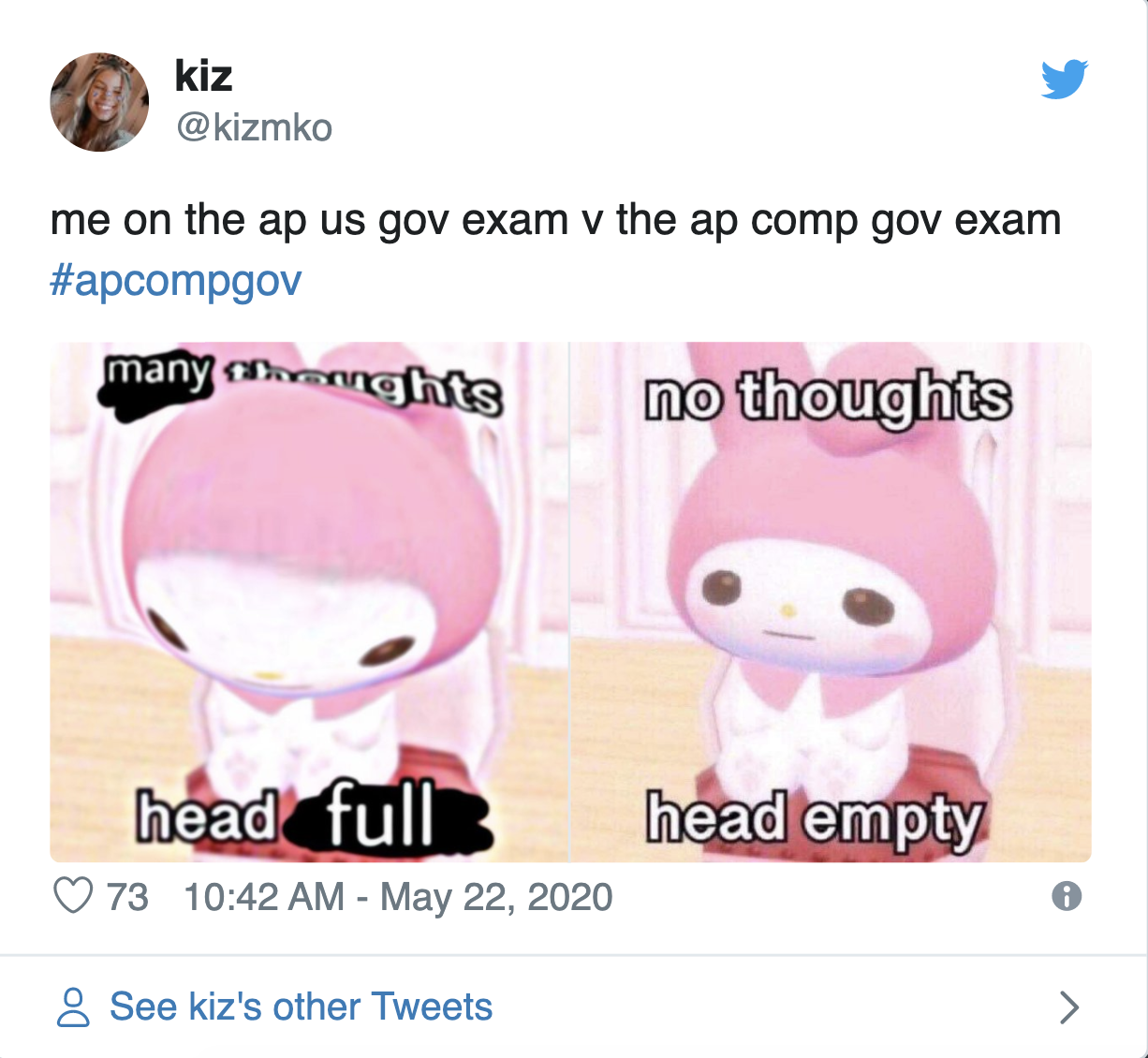 This one doesn't need too much explanation, let's just say it's a lot easier to remember how the political institutions of one country work than remembering the political systems of six different countries and their similarities and differences 😩. Especially when that one country only has two major political parties.

If you can't remember what you learned in class... 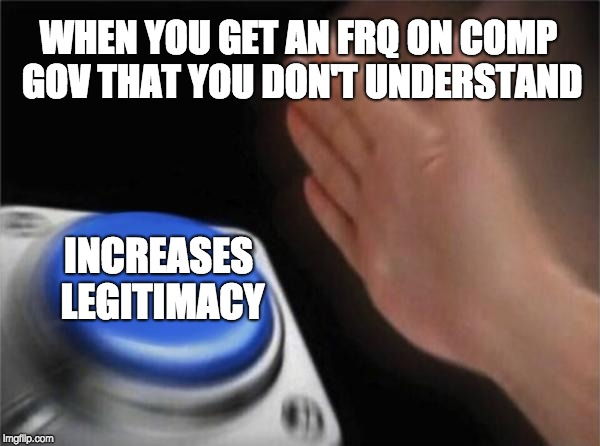 A legitimate government is one that the people accept (or lawful, or authentic, or let's just say there's a few different ways to define "legitimate"). An illegitimate government is not a great time in many cases for the government (see: coup d'etat ⚔️) or, more importantly, for the people (see: human rights abuses).
Side note: legitimate governments also abuse human rights, just because they're formally recognized and accepted doesn't mean they're perfect!
That's why governments do everything they can to increase the acceptance of their governing. Essentially, they don't want to lose their power or authority, and they want to make sure other countries recognize them as deserving of recognition.

If you learned about the Great Firewall and the Chinese government's surveillance...

China's government regulates practically every aspect of its Internet. With the Great Firewall blocking access to websites deemed problematic and strict vetting of all content, the government controls pretty much everything that people can post on the web.
It's very Orwellian and def reminds us of the surveillance state that exists in 1984.

If you're still upset about Brexit... 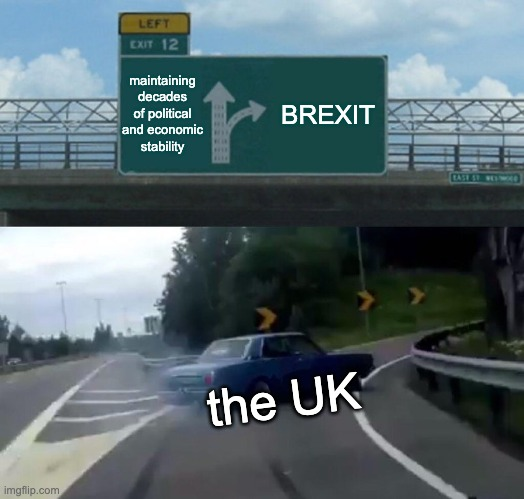 After months of misinformation and campaigning by the UK's Conservative Party, the country voted to leave the European Union in a referendum. This threw Europe into political and economic turmoil, and for a while, other member states also threatened to leave.
So, why all the chaos 🤨?
A few decades after World War II, the European Union formed to ensure that Europe would remain stable. And, despite all its faults, it worked! The EU standardized its many laws and made movement and trade throughout the continent incredibly easy for member states, bringing massive economic benefits to the UK.
However, due to arguments that the UK was losing its sovereignty (and other things), the UK decided to leave.

If you wish democracy was just a little bit easier to do...

If you realize that these Russian term limits don't really seem to be limiting Putin... 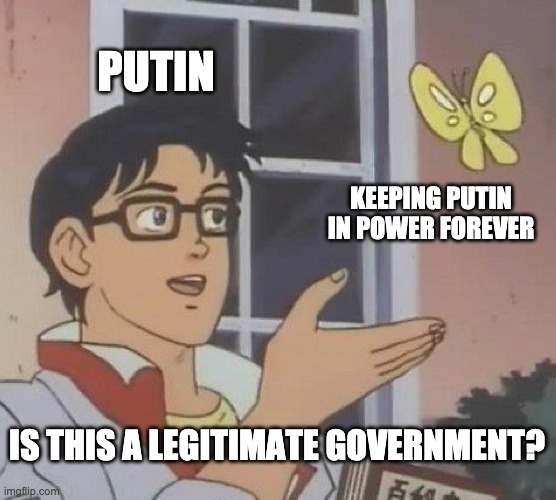 Russia used to have a two-term limit for its presidents. The keywords here are "used to" because this year (2020), after constitutional reform backed by the man himself, the Constitution re-granted Putin the right to run for president again in 2024.
Because one Russian presidential term lasts six years, this could mean that Putin stays in power until 2036.

If you love free speech... 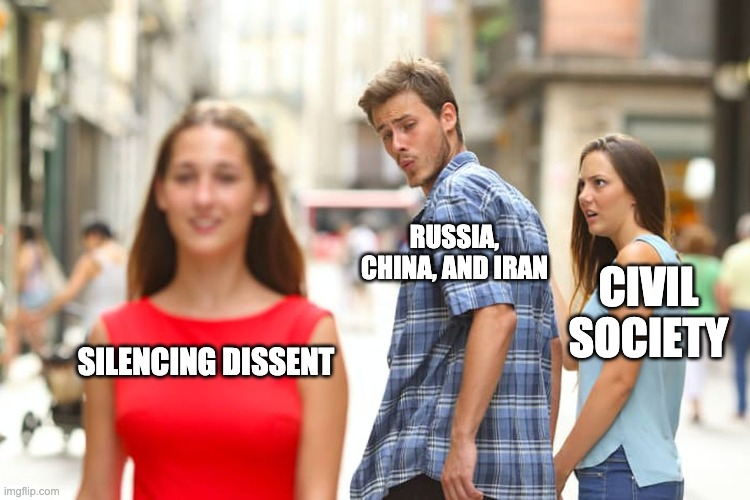 There are soo many examples of China, Russia, and Iran silencing people who speak out against them.
Think of the police attacking protestors in Hong Kong with tear gas and military-grade equipment. Or, the detainment of journalists in Russia for exposing corruption. Or, even mass arrests in Iran in response to protests.
Unfortunately, these are only a few examples of countries that silence people for speaking out against them, and human rights organizations continue to expose abuses like these all around the world.

If you read about Nigeria's Fourth Republic... 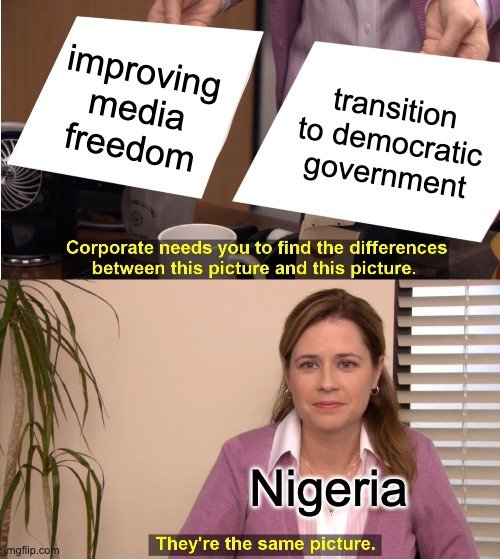 After the creation of the Fourth Republic, Nigeria's current republican (think representative, not the American political party 😂 ) government, media freedom in the country increased significantly. This is likely due in part to the country's current constitution, which explicitly protects freedom of expression.
Buut, just because Nigeria started to democratize doesn't mean it's perfect. There's still a lot that the country can do to protect free speech and journalists. Even today, journalists in the country face human rights abuses, and laws to protect speech often are not enforced.

There's nothing quite like ~being in the know~ when it comes to memes. Or knowing that you're one of the 15 people on the planet that understand one. Good thing you took CompGov so you get to feel that every time you see one of these.
And, feel free to spread the love! Share 'em with your friends in the class, or make your own and tag @thinkfiveable or me on Twitter!