SAQ practice is one of the most important ways to prepare for the exam! Review 4 APUSH SAQ student writing practice samples and corresponding feedback from Fiveable teacher Caleb Lagerway.

Use the image below to answer the following questions: 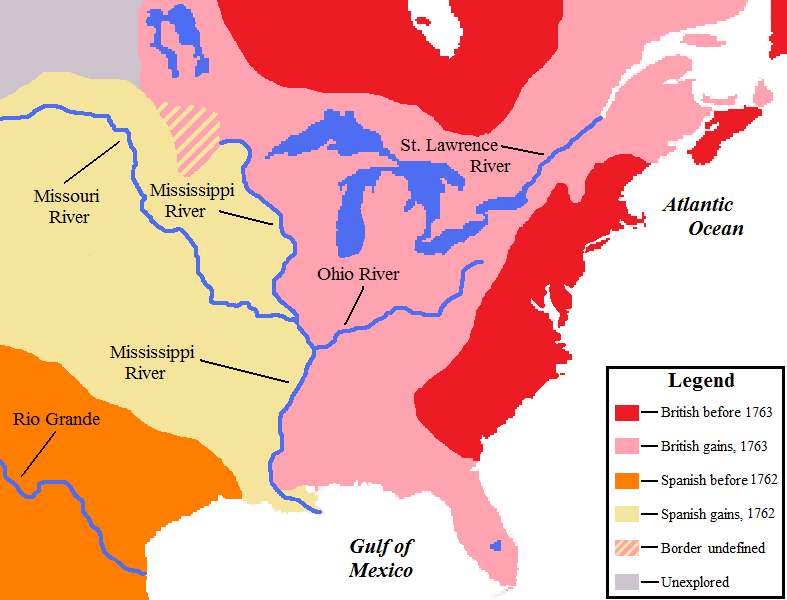 a) One specific cause would be the outcome of the Seven Years’ War. Before the war, the French owned a vast amount of land in North America, but after their defeat in the War, they only have Haiti left. Both the Spanish and British gained some of the land the French had owned. b) One effect in 1763 was Pontiac’s Rebellion. This was a conflict with Native Americans and the British colonists’ expansion westward into the land they inhabited. Although the British did own the land all the way to the Ohio River Valley, the Native Americans did not want them to encroach on their land, and thus it led to greater tension between the two groups. c) The land in the map continued to be a site of conflict in the American Revolution. The war was fought on American soil, so the British army had to travel all the way to North America to fight the colonists and the Continental Army. Therefore, the territories shown in the map continued to be locations of conflict, where in this case was the fight for independence from Great Britain and self-government.

You correctly described the map as the aftermath of the Seven Years’ War and your description of its effects in A earned a point. Pontiac’s Rebellion works well for B and you defined it well. C works too: the deep red is the site of lots of fighting during the Revolutionary War. The lighter red/pink areas continued to be contested territory between White Americans settlers and Native Americans (think the Treaty of Greenville).

a) As a result of the Seven Years War, the British ownership of land in the western hemisphere increased. Due to their loss, the French lost their holdings in America, giving their land to the British in the Treaty of Paris. b) One effect of the land ownership change was the increased tensions between the American colonists and the British. Through acts such as the Stamp Act, the Intolerable Acts, etc. the British ended the salutary neglect policies of the past that allowed for some freedoms in the colonies. Additionally the stationing of british soldiers condoned by the Quartering Act also angered the colonies increasing the tensions that lead to the American Revolution. c) As a new nation after the American Revolution, Americans wished to expand their territory and power among the land, something that could not easily occur due to the divisions on slavery. This land would be a conflict due to the tensions that arose in the issues of its expansion and the spread of slavery.

You correctly described the map as the aftermath of the Seven Years’ War and your description of the Treaty of Paris in A earned a point. For B, you’re not wrong, but you need to explicitly connect your answer to the map. I see where you’re going, but it’s on you to explain how the British victory in the Seven Years’ War led to increased tensions and taxation (for example, talk about the huge debt the British ran up while fighting the war that they then wanted to pay off through direct taxation in the North American colonies). For part C, your answer might technically be correct, but in order to earn the point, you’d need a specific example (maybe mention the Northwest Territory in 1787 and its prohibition on slavery). Most of the specifics on fighting over slavery and westward expansion are in Unit 4 and thus after 1800. Just be careful.

a) British gains more land in 1763 because they won the seven-year-war, earning more territories. b) Britain was in debt, thus taxing the colonies, including the Stamp act. c) American Revolution happened starting 1775.

Your answers were all correct, except that you needed more depth to fully earn the points. You need to explain how the map is connected to debt in B and to the American Revolution in C. If this was a full SAQ (or on the 2020 modified DBQ), you want to make sure you’re doing the full ACE (Answer-Cite-Explain) for each vocab word so that you’re not only dropping proper nouns like you did, but also defining those (so the reader knows that you know what you’re talking about) and then connecting them back to the prompt/thesis to show how your evidence proves the point you’re trying to make.

a) The 7 years war resulted in a major change of land ownership. After the French were defeated in 1763, they were removed from North America and the British gained a vast amount of land. They expanded West till the Mississippi River and parts up North.
b) Now that land was open for colonists to expand after the 7 years war, conflict erupted with Native Americans. Natives resisted encroachment on their lands and it resulted in Pontiacs Rebellion. Soon after, England passed the Proclamation Line of 1763 to prevent further conflicts.
c) Even after the American Revolution the land still was the center of controversy. Many debated whether the new territory should allow or ban slavery. The Northwest Ordinance, which banned slavery in the northwest territory, was passed in 1787, but the debate didn’t end there. The Constitution didn’t address the issues of slavery, so this controversy intensified with the country not unified on what to do with the new land.

Nice work! For A, consider mentioning something specific about that territory (even calling it the Ohio River Valley might help). B was great and dropped specifics. Your answer in C was good too. Because I can’t resist, I’ll add some nuance: the Northwest Ordinance was passed with votes from Southern states too: the Northern ones wanted to stop the spread of slavery, but the Southern ones wanted to avoid competition from potential tobacco farms in the Northwest territory. Thus, while the Northwest Ordinance’s ban on slavery was bi-sectional at first, it merely covered up the underlying tensions.