The FRQ is a great way to prep for the AP exam! Review Unit 3 FRQ practice writing samples on Cellular Respiration and corresponding feedback from Fiveable teacher Caroline Koffke. 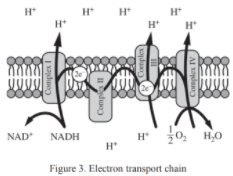 A) The catabolism of glucose in glycolysis gives the NAD+ the Hydrogen it needs to later be turned into ATP. Oxidation breaks bonds which also releases energy. The formation of a proton gradient by the electron transport chain keeps the ionic Hydrogens on the outside of the cell so that they go through the ATP synthase channel to be turned into ATP. B) Nearly all organisms perform glycolysis because all living organisms have cytosol which it takes place in and if the organism is not in an oxygen rich environment glycolysis can still take place because it takes place in anerobic conditions. These factors of glycolysis point to the fact that the common ancestor of all organisms that would have survived in anerobic conditions with minamal complexity, no membrane bound organels, would have been able to undergo glycolysis to unlock energy. C) The energy available from 30 moles of ATP is 219 kcal. The efficiency of total ATP production from one mole of glucose is 693.3 kcal. When excess energy is released it is stored in long term storage units, in animals the energy can be stored as glycogen in plants it can be stored as starch. D) My scientific question is, was mitochondria its own bacteria, with enzymes in its cytosol, that developed a symbiotic relationship with eukaryotic cells, and then evolved to be produced and live inside of the cells as organelles.

a) Points awarded: 1 --> For your first statement, you need to be more specific about how NAD+ and Hydrogen (which is NADH) will later be used to make ATP because NADH doesn’t turn into ATP itself. You need to mention that the NADH from glycolysis carries the electrons that will be used in the electron transport chain (ETC), which then provides ATP. Similarly, for the second statement, you need to be specific and say that the oxidation releases energized electrons that will be used in the ETC to then make ATP. Remember to show how these small steps contribute to the main steps of ATP synthesis. Your third answer is great. Just remember that the Hydrogen ions are still within the mitochondria but just in the intermembrane space, rather than outside of the cell.

c) Points awarded: 1 --> Your first answer is great. For your second answer, remember that efficiency is (energy output)/(energy input). In the first part, you found that 30 moles of ATP has 219 kCal available, and the problem states that oxidation releases 686 kCal of energy. Thus, the efficiency = (219 kCal)/(686 kCal) = 31.9%. For your third answer, I believe you confused energy storage with excess energy storage. Excess energy is the leftover not used to make ATP, and it is released as heat (which is why mitochondria heat up!)

d) Points awarded: 1 --> Good answer! Relating the question to eukaryotic evolution was the best way to do that.

a. The catabolism of glucose in glycolysis and pyruvate oxidation produces electron carriers in the form of NADH that will later be used in the electron transport chain to produce ATP. In a similar fashion, the oxidation of intermediates in the Krebs Cycle produces electron carriers in the forms of NADH and FADH2, which are again used in the electron transport chain. In the electron transport chain, the electrons are taken from NADH and FADH2 and their energy is used to pump hydrogen ions against their concentration gradient into the mitochondrian’s intermembrane space.
b. The fact that nearly all existing organisms perform glycolysis indicates that all species share a common evolutionary ancestor that possessed this same ability and then passed it on to its descendants. This is reinforced by the fact that glycolysis can occur anaerobically, indicating that glycolysis is likely an ancient metabolic function performed by the first living organisms on earth when atmospheric oxygen was low. Lastly, the fact that glycolysis only occurs in the cytosol supports this theory because the earliest living organisms on earth were likely prokaryotes and did not contain organelles.
c. The amount o energy available in the 30 ATP molecules produced by glucose metabolism is 219 kcal/mol, meaning that this process is about 32% energy efficient. The excess energy that is not stored in the form of ATP is given of as unusable heat as bonds between atoms are broken.
d. The fact that prokaryotes contain enzymes found in eukaryotic mitochondria poses the question, “Were mitochondria at some point prokaryotic cells that were engulfed by by larger cells, thus creating a beneficial mutual relationship?” This, being called the Endosymbiotic Theory is supported by the similarity of prokaryotic metabolic function to the metabolic functions of eukaryotic mitochondria.

a) Points awarded: 2 --> Well-written answers! For your third point, you need to focus on explaining how the hydrogen ion concentration gradient explicitly relates to ATP formation rather than how it’s formed. All you need to do is add something about how the gradient causes H+ to go through ATP synthase, which uses the energy of the H+ to make ATP. Additionally, remember that the H+ ions go from the intermembrane space into the mitochondrial matrix.

d) Points awarded: 1 --> Try to include the given information in the question: “Since the Krebs cycle occurs in the mitochondria, were mitochondria at some point prokaryotic cells that were engulfed by larger cells, thus creating a beneficial mutual relationship?” Additionally, if you’re short on time, you don’t need to qualify the response–you can just write the question down.