Sometimes AP French can get a bit confusing and you can't help but ask "quoi" whenever your teacher mentions passé composé or demonstratives. That's okay though because, after a year in the course and proper studying (with Fiveable resources, of course), these will become second nature to you.

Sometimes AP French can get a bit confusing and you can't help but ask "quoi" whenever your teacher mentions passé composé or demonstratives. That's okay though because, after a year in the course and proper studying (with Fiveable resources, of course), these will become second nature to you. 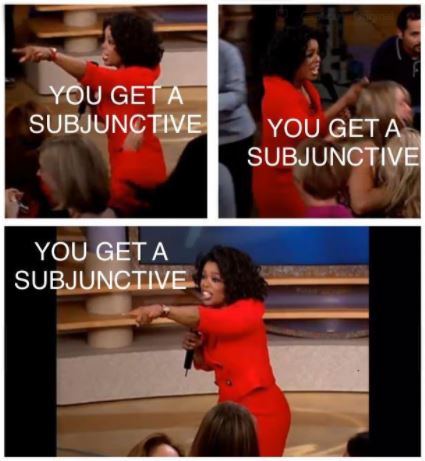 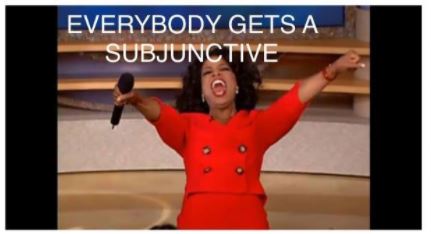 Honestly, getting a subjunctive is one of the best things that can happen to an AP French student, but still, most people would rather get a car. But hey, at least it's a subjunctive and not a participe passé because someone would've given that right back 😳 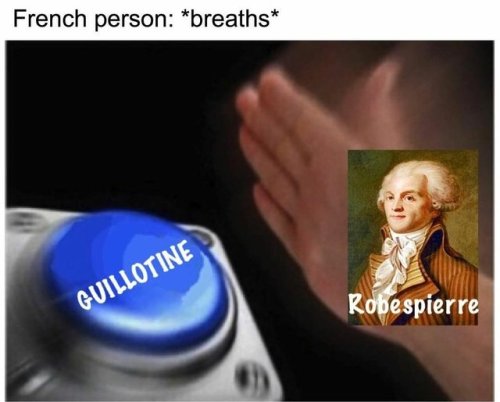 Yes, we know that this meme has more to do with French history than language or culture, but even as an AP French Language and Culture student, you should know a decent amount about the nation's histoire.

Robespierre is known for sending many to the guillotine 🤕 during the French Revolution, but little did he know that his own people would eventually return the favor and off his head in 1794. 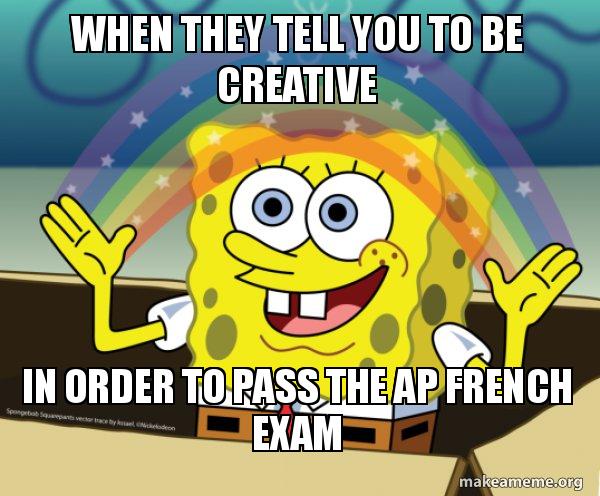 Image Courtesy of Make a Meme

SpongeBob was right. Having an 🙌 IMAGINATION 🙌 is super helpful when creating responses for the AP French cultural comparison or the email reply because there's a lot of freedom as to where you can go with those prompts.

Because they are open-ended, you also have more freedom with word choice and structure, which is why being creative is so helpful. You won't need a special box for it though. 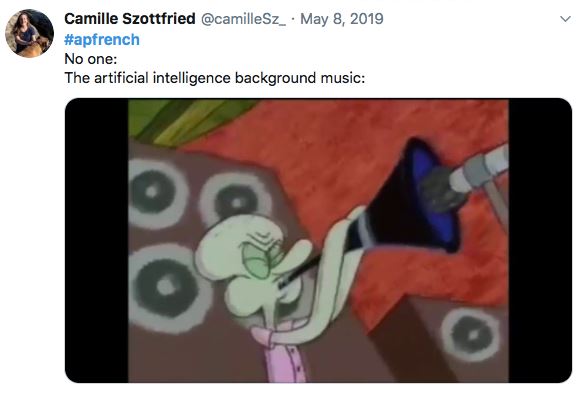 This meme may not make sense to you if you haven't taken the AP French exam yet or any of the other language exams, but be prepared for the loud background music 🎶 Luckily, it doesn't sound nearly as bad as any of Squidward's many many clarinet solos. 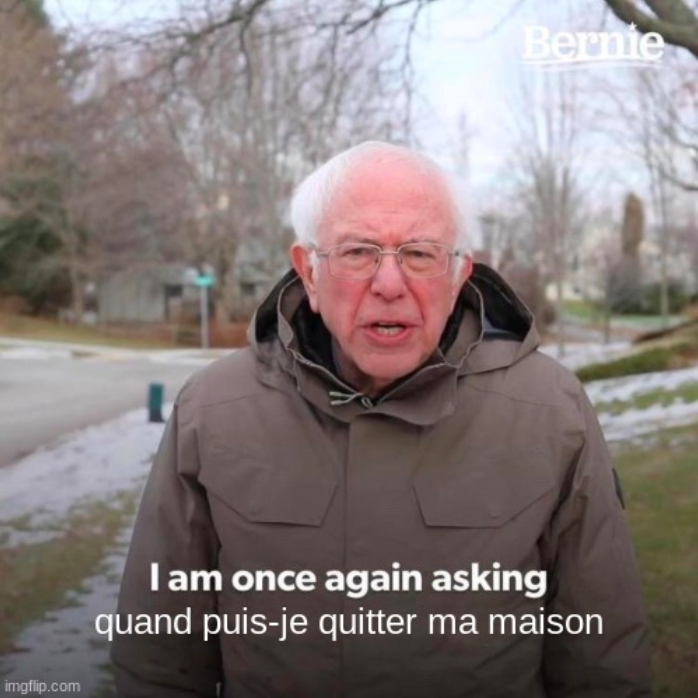 We're sure the question "Quand puis-je quitter ma maison?" or "When can I leave my house?" has come up in everyone's mind at least 5 times during quarantine and for good reason. The best thing we can do right it wait, act responsibly, and keep practicing our français while it lasts. 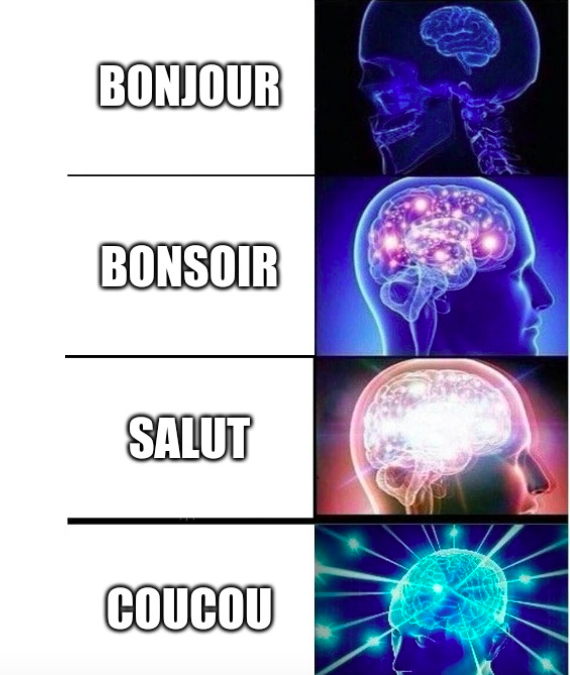 As you probably learned in French 1, the French language has lots of ways to say hello based on the time of day and how formal your situation is.

Coucou is one of the more informal ways to greet someone and is typically used as a casual hello to friends or when talking to young children. So, it may not be a good idea to say it to your prof 😬 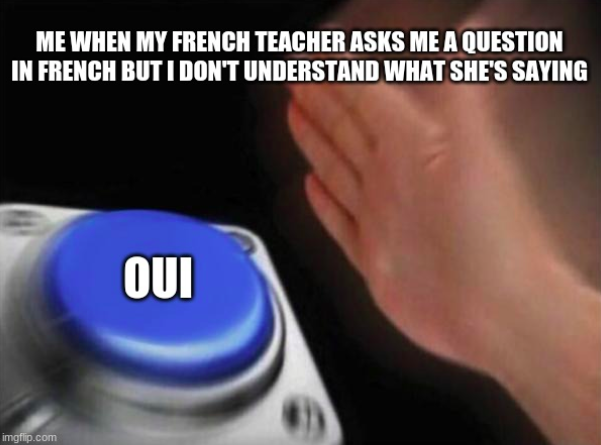 We've all had the moment where we've been spoken to in French class and don't understand a word, but sometimes it isn't the best idea to just say "yes" to whatever your teacher says. Case in point: 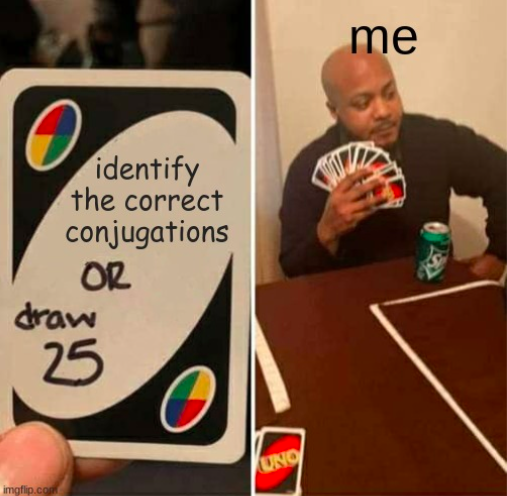 Oh, conjugations! Sometimes they can be logical and follow a pattern, but other times their irregularity kicks in and you can't tell which is the correct form or whether it is a DR MRS VANDERTRAMP verb. Luckily, AP French resources on Fiveable can help you get them down pat.

Making Your Own Memes

If you laughed after seeing any of the memes above (or maybe didn't and want to make better ones for yourself 😬), then this is a perfect opportunity for you to learn how to make your own! Many websites like as ImgFlip can be used to add text to existing meme templates. There are fields for you to type over each of the characters to add your super funny 😆 content and make someone else laugh.