What Are These Major Environmental Disasters?

This is the list that we at Fiveable have created! While it would be helpful to have an understanding of other disasters, these are the 10 disasters you should focus on:

In 1986, the largest Nuclear Energy disaster occurred in Chernobyl, USSR. During a safety check, there was a spark in power which led to a reactor vessel rupture and explosion where the roof blew off the building and released a radioactive cloud. A wide area surrounds Chernobyl, Ukraine in present-day where nobody tries to live due to the high rates of cancer and defects of birth. There is a high radiation level around.

That radiation drifted to the west of the plant all the way from Russia towards Eastern then towards Western Europe. Since 1986, tons of kids in the thousands have been diagnosed with many different forms of cancer, especially those within a twenty mile radius. The reactor involved, Reactor Number 4, has been sealed off with a concrete wall to prevent radiation from spreading.

In Three Mile Island Pennsylvania on March 28, 1979, near the major city of Harrisburg, PA, a nuclear reactor went into partial meltdown. The feed pump for water in the nuclear reactor broke and the non-nuclear cooling system of reactor 2 of the nuclear energy power-plant failed. This caused cooling water to drain away from the reactor resulting in partial melting of the reactor core.

This partial nuclear meltdown, since it occurred in the USA, caused the country to go into a media feeding frenzy state where the public distrusted the government's control and regulation on nuclear reactors. In the USA, even today, nuclear energy is low on our portfolio because of the public fear associated with Three Mile Island.

On March 11, 2011, a huge 9.0 magnitude earthquake hit the coast of Japan causing a 15 meter tsunami to be created off the coast. The 15 meter tsunami caused 3 reactor’s cooling systems to be damaged as well as the power control supply to be damaged. Radioactive materials (the core of those 3 reactors) released tons of radiation around the Fukushima Daiichi Reactor. 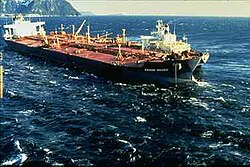 On March 24, 1989, in the Prince William Sound off the coast of Alaska, a large oil tanker, the Exxon Valdez, collided with the Blight Reef. The collision caused 10.8 million gallons of oil to be spilled into the Sound. This spill is considered the largest US oil spill in history. The oil spread almost 500 miles off of the spill site to go on to stain thousands of miles of coastline.

The spill also greatly reduced the biodiversity of the Sound. Hundreds of thousands of birds, fish, seals, otters and other animals would perish as a result of the oil in the water.

Require oil tankers to have double-layered walls where oil is stored. This would allow for a puncture in one wall to still have another layer of protection from oil spills.

In the height of the Industrial Revolution in London, in December of 1952, gray (industrial) smog laid on top of the city of London so thick that many people died from respiratory illness. The winter of 1952 was unusually cold and caused additional coal combustion and many people transported themselves only by car. This caused the smog with a combination of black soot, sticky particles of tar and gaseous sulphur dioxide. During December of 1952, a thermal inversion also occurred over the city of London. This resulted in the heaviest winter smog that ever occured in the history of Industrialization and Coal-Burning.

DON’T CONFUSE the smog (gray) of London with photochemical (brown) smog. Photochemical smog is caused by NOx, NOT SOx from Coal Burning.

A chemical plant in Bhopal, India had an exothermic reaction due to a poisonous gas cloud escaping from that plant. The Union Carbide Pesticide Factory Poisonous Gas Cloud contained 45 tons of MIC, also known as methyl isocyanate, and the cloud covered over 30 square miles of land in and around Bhopal.

Thousands of people died within a few hours of the gas cloud escaping. In the next few months, about 15,000 more people died from complications. In total, about 500,000 people died or were severely injured by the poisonous gas cloud. A very very high number of children around Bhopal have been born and have lived with many different birth defects and defects. The Union Chemical Company paid over $1 billion in litigation as compensation to families that were affected.

Create government regulations that control the storage of hazardous chemicals. Also require that buildings that hold chemicals or other toxic substances be built to withstand an earthquake of a magnitude of >6.0 and other natural disasters.

By 1978, the problem was very apparent. Hundreds of families sold their homes to the government to the federal government for pennies on the dollar. Everybody evacuated the area after concerns were found that many kids were suffering birth defects and endocrine disruption from the chemicals under the ground. The chemicals contaminated the drinking water fountains in the school and got many families sick and killed many people.

How Did We Fix It?

We developed the CERCLA Superfund Disaster Program to help pay for the cleanup of toxic waste sites that have been abandoned.

In 1956, many people in Minamata Bay, Japan were diagnosed with a new disease called Minamata Disease. The symptoms included fatigue, convulsions, loss of motor functions, and slurred speech. A few years later, an investigation concluded that the disease was the result of industrial waste poisoning by the Chisso Corporation. Large amounts of mercury and other toxic heavy metals were found in the Bay’s Waterways and in the fish. Fish is a huge part of the Japanese diet, so many Minamatans got the Minamata Disease bio-magnified to them through many types of fish from the bay.

We could have created legislation that requires open ocean fisheries to check their fish for mercury levels before selling them at markets.

Right now, due to Ocean Acidification, coral reefs are becoming stressed and the algae that it depends for food and color die out. This is leaving an underlying white or bleached skeleton of calcium carbohydrate that makes the Coral “Bleached”. 10% of all of the world’s coral reefs are becoming bleached which causes them to die out leading to a loss of biodiversity at coral reefs in the ocean. Coral reefs are some of the most productive aquatic biomes that have habitats for all sorts of different fish species.

We can reduce our burning of coal and we can increase our dependence on renewable energy sources like Solar and Wind. Reducing the burning of coal as a fossil fuel allows for less SOx to be in the atmosphere which causes less acid rain to happen. Less acid rain will lead to less ocean acidification.