Interestingly, World War I - more commonly known as the Great War for Empires back then - was sparked by multiple causes, including an immediate cause that served as the final straw towards European escalation. These causes can be best summarized using the acronym MANIA with each individual component highly interconnected to the rest of the puzzle. Quite a fitting word to encapsulate WWI, don’t you think?

Remember that AP World History: Modern loves to use technical historical terms to describe key ideas and trends. Look at the root word: military. Militarism refers to the build-up of a country’s arms and firepower to outpace neighboring nations in military might. Industrialization further intensified this process as each nation produced vast arsenals of deadly weapons ranging from mustard gas to flamethrowers within a span of months or years, not decades.

One key instance is the naval build-up between Great Britain and Germany during the early 1910s. After Germany was successful in building enough Dreadnoughts (battleships) to make a fleet, the British ordered the production of twice as many battleships as a countermeasure to prevent the Germans from invading them. The back-and-forth increase in military expenditures and weapons between the two raised fears of a massive conflict in Europe.

By 1914, anxiety loomed over the entirety of Europe and all European powers are ready for war as the world held its breath on what’ll happen next.

Unlike continents with less countries like North America, European states have been historically after each other's throats due to their close proximity. As a result, the pecking order has often shifted throughout time. Dominant powers changed most notably from Rome back in the Classical era to Spain and Portugal in the Age of Exploration to Britain as the birthplace of the Industrial Revolution; therefore, political stability on a regional scale for long periods is nearly impossible.

To avoid constant worries about invasions from all sides and tip the balance of power to their favor, nations established alliances with their neighbors. Alliances not only offered guaranteed safety and protection from member states but also stimulated trade between them. By World War I, Europe was defined by two major alliances:

Theoretically, the alliance system prevented nations from making reckless actions at the risk of incurring the wrath of the entire alliance, but an event that’ll be explored shortly will begin a domino effect... and entangle alliance members to the developing conflict.

Imagine watching a football game and the team you’re rooting for wins two, three games in a row. Have you ever gotten the feeling that said team will be unstoppable for the rest of the season? If yes, then you have an understanding of what nationalism is.

Growing nationalist sentiment fed fuel to the torch of militarism and the desire to use weaponry to expand the glory of the state and its people. Nationalism destabilized ethnically diverse nations such as Austro-Hungary and Serbia as certain ethnic groups within the state clamored for an independent country consisting of their people and only their people, completely separate from the rest of the bunch whom they considered different. Hint, hint: this is the direct motivation behind the last reason on this list.

Ah, good ‘ol imperialism persisting through history. It is undoubtedly one of the main causes of World War I. Even with the risk of endangering alliances and bloodshed, nothing beats the yearning for expanding and gaining resources abroad, preferably not in Europe.

The scramble for colonies in Africa destroyed the balance of power established by the Congress of Vienna (convened after Napoleon’s defeat to divide up the lands he conquered and devise a stable territorial layout with everyone’s agreement) as some European nations acquired more overseas territories than the others. While imperialism did not immediately cause the war, it is the medium that causes the Great War to become a true World War as battles were fought not only in Europe but also in Asia and Africa with immense and devastating consequences. 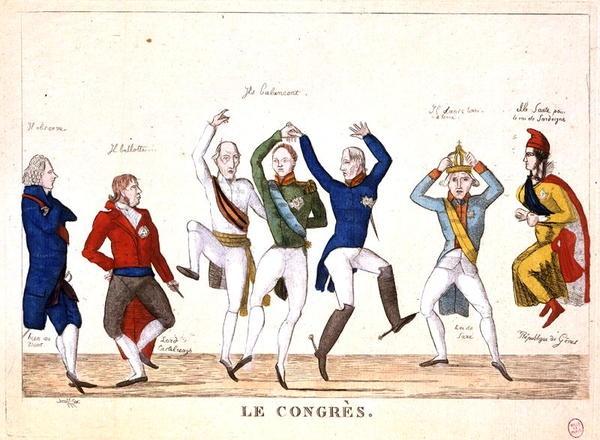 This is a political cartoon representing the Congress of Vienna. Try to analyze this document like it's in your DBQ to practice for the exam!

If you can't analyze it, try reading the article above and read PBS' interpretation of the political cartoon!

It was a sunny day on June 28, 1914 when Austro-Hungarian archduke Franz Ferdinand was assassinated while parading at Sarajevo (Balkan state) with his wife. The perpetrator of the bold and heinous crime was Gavrilo Princip, a Serbian nationalist who is part of a terrorist group called the Black Hand. Its ultimate goal is to create an independent Serb state and eliminating the archduke supposedly is the first step towards achieving that purpose.

Unfortunately, things only further went downhill from this point. Angered by the archduke’s death, Austria-Hungary, backed by Germany, demands Serbia to hand over Princip and his co-conspirators alongside 9 other unreasonable requests with some alluding to the nation’s desire to take over the Balkans. After Serbia declined to comply, Austria-Hungary declared war. Neighboring Russia - a Serbian ally - then mobilized its forces. When it ignored Germany’s demands to stop, the Germans finally joined the fray on Austria-Hungary’s side.

Great Britain sides with Russia and Serbia after Germany invades Belgium (British territory) to get to a fully-mobilized France. Japan, through its military alliance with the British, joins the war on their side weeks later. The Ottoman Empire, the United States, and other European states follow suit much later on. By the end of 1917, the following major players, alongside many others, fought for their respective sides:

B Austria-Hungary declares war on Serbia

A Archduke Franz Ferdinand is assassinated

E Great Britain enters the war on the Allies’ side