The Law of Conservation of Energy is as follows:

If only forces internal to the system are acting on an object in a physical system, then the total change in mechanical energy is zero.

This essentially means that energy in a system can change its form without energy leaving the system.

The equation version of this law is:

Which states that the total mechanical energy, ME, is the sum of the potential, U, and kinetic energy, K, in a system.

When a nonconservative force acts on a system, work is done, and this work does change the total mechanical energy of the system! This work can be found in a simple equation:

When you have a conservative system (total energy is a constant), you can use the Law of Conservation of Energy to calculate unknown quantities in many scenarios like rollercoasters, ramps, pendulums, and springs.

You can use this PhET simulation to see conservation of energy in practice!

Always, always, always remember to state that you're using conservation of energy! You should begin all energy problems by stating whether or not energy is conserved as that typically earns you a point.

AP loves to make students think about proportions, so whenever asked about comparing the same variable, try to find an equation you can use! Don't try to plug in anything to the equation, just look at what coefficients are different at the two moments in time you are examining.

Additionally, you should notice that they wanted you to look at the relationship you discovered in a previous part of the question.

Same process as the previous part!

If you haven't learned about differential equations in calculus that's okay! But once you do, you should notice that AP will never ask you to solve them due to the time crunch you are in unless they are incredibly simple. Additionally, take note that you did not have to use all the variables they listed in the question. Most FRQs will focus on more than one unit of physics and you will have to be aware of the intersections between things like forces and energy.

Separating variables is always the first step in resolving a differential equation, then integration. Notice that if it is a definite integral they want you to place the bounds/ use the correct limits and if it is an indefinite integral(which is not common in the realm of physics) they will give you a freebie point for just stating +C! 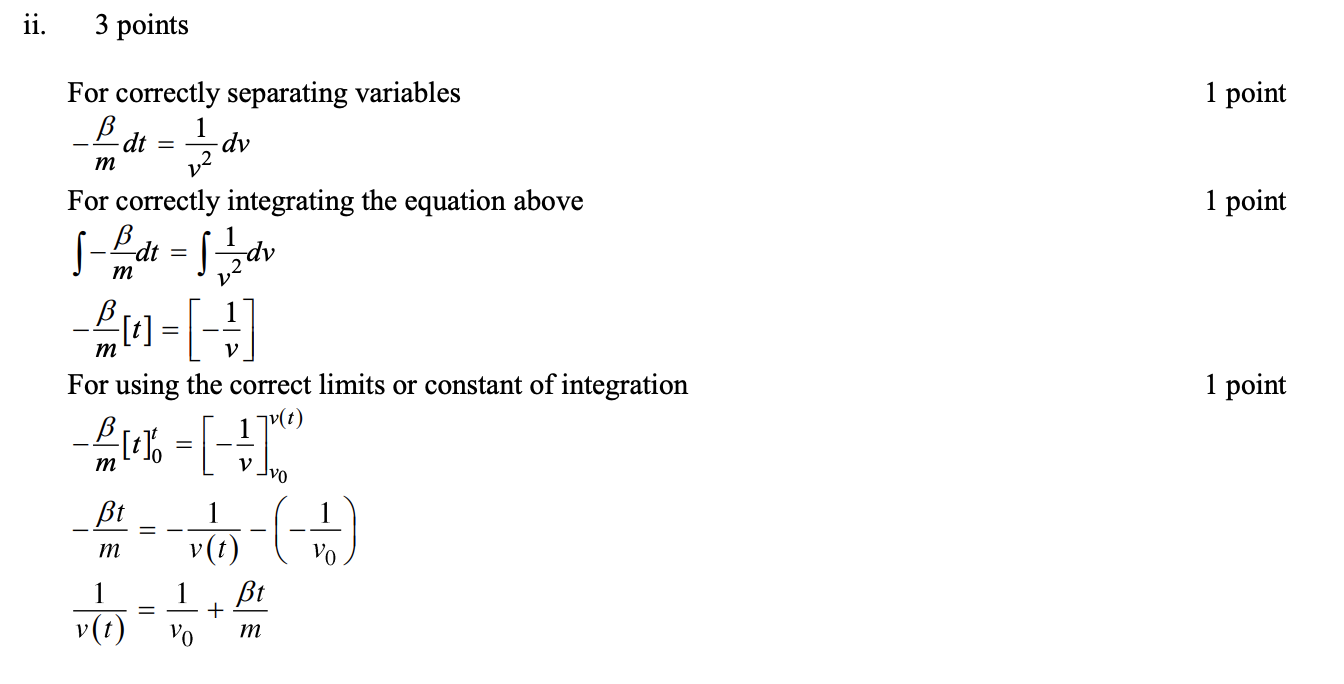