A force exerted on an object can cause a torque on that object.

Only the force component perpendicular to the line connecting the axis of rotation and the point of application of the force results in a torque about that axis.

A torque exerted on an object can change the angular momentum of an object.

Torque is the rotational equivalent to a Force. A net torque applied on an object will cause the object to change its rotational motion.  The torque depends on 3 factors:

The torque on an object can be calculated by using the equation:

Where 𝜏 represents the torque, F the applied force, r the distance from the pivot and 𝜙 is the angle between the r and F vectors.

If all the torques on an object are balanced (∑𝜏=0) then the object is in equilibrium.

An object weighing 120 N is set on a rigid beam of negligible mass at a distance of 3 m from a pivot, as shown above. A vertical force is to be applied to the other end of the beam a distance of 4 m from the pivot to keep the beam at rest and horizontal. What is the magnitude F of the force required? STEP 1: Identify all the forces in the diagram that could cause a torque

STEP 2: Since the beam must remain at rest and horizontal, the two torques must cancel each other out. Setup the equation, substitute in knowns and solve for F.

Moment of Inertia (I)

In general, the closer the masses are to the pivot point, the easier it is to rotate the object. In the example below the when the skater’s arms are outstretched, they have a larger moment of inertia. When they bring their arms inwards, their moment of inertia decreases and it is easier to rotate. 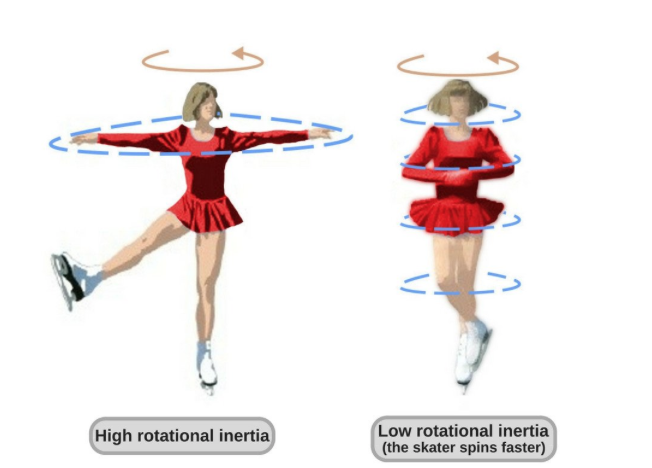 If there is an unbalanced torque (∑𝜏 ≠ 0) then the object will change its rotational motion. The angular acceleration can be found using the equation:

A uniform rod of length L and mass M is attached at one end to a frictionless pivot and is free to rotate. The rod is released from rest in the horizontal position. What is the initial angular acceleration of the rod? The moment of inertial of a rod rotated about its end is ⅓ ML^2.

STEP 1: Identify all the forces in the diagram that could cause a torque

Your Final Answer should be: