The angular momentum of a system is conserved.

If the net external torque exerted on the system is zero, the angular momentum of the system does not change.

Angular Momentum - similar linear momentum - is conserved when there are no external torques on the object(s) in the system. 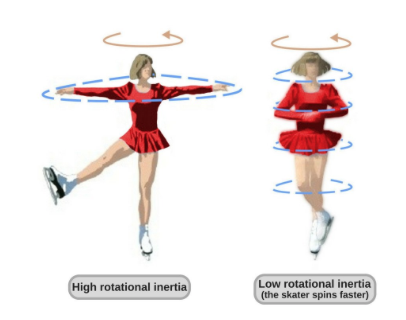 Other common situations with the conservation of angular momentum involve collisions and planetary motion. 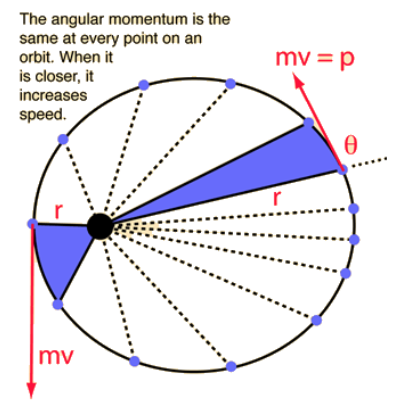 As shown in the image above, the radius of the orbit changes, resulting in different velocities for the planet. You may have covered this idea earlier in terms of potential and kinetic energies, now we can also explain it in terms of conservation of momentum. This idea also leads to Kepler’s 2nd Law (The law of areas). 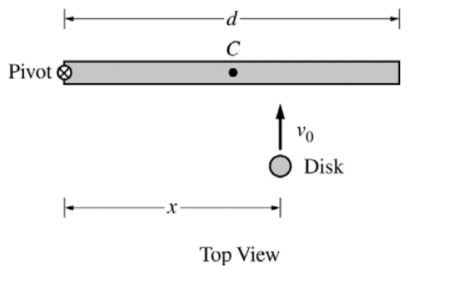 The left end of a rod of length d and rotational inertia I is attached to a frictionless horizontal surface by a frictionless pivot, as shown above. Point C marks the center (midpoint) of the rod. The rod is initially motionless but is free to rotate around the pivot. A student will slide a disk of mass:

toward the rod with velocity v0 perpendicular to the rod, and the disk will stick to the rod a distance x from the pivot. The student wants the rod-disk system to end up with as much angular speed as possible.

a. Immediately before colliding with the rod, the disk’s rotational inertia about the pivot is:

and its angular momentum with respect to the pivot is:

Derive an equation for the post-collision angular speed ω of the rod. Express your answer in terms of d, mdisk, I, x, v0, and physical constants, as appropriate.

Your Answer should be: