A net torque exerted on a system by other objects or systems will change the angular momentum of the system.

Torque, angular velocity, angular acceleration, and angular momentum are vectors and can be characterized as positive or negative depending on whether they give rise to or correspond to counterclockwise or clockwise rotation with respect to an axis.

The angular momentum of a system may change due to interactions with other objects or systems.

The change in angular momentum is given by the product of the average torque and the time interval during which the torque is exerted.

🎥Watch: Minutephysics - What is Angular Momentum? 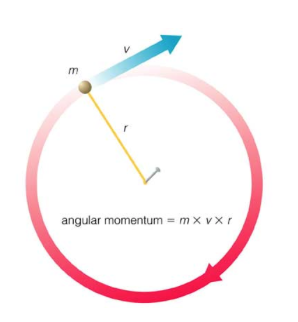 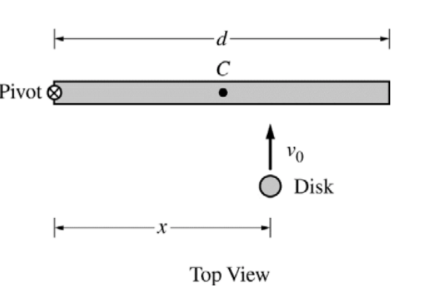 The left end of a rod of length d and rotational inertia I is attached to a frictionless horizontal surface by a frictionless pivot, as shown above. Point C marks the center (midpoint) of the rod. The rod is initially motionless but is free to rotate around the pivot.

A student will slide a disk of mass:

toward the rod with velocity v0 perpendicular to the rod, and the disk will stick to the rod a distance x from the pivot.

The student wants the rod-disk system to end up with as much angular speed as possible.

CORRECT ANSWER: To the right of C

the largest it can possibly be, it needs to hit at the greatest distance away from the pivot which is on the right side of C.

(This explanation uses the law of conservation of momentum which will be covered in the next section.)