👨‍💻 Enduring Understanding 3.B 🏘 Essential Knowledge 3.B.3 Periods of a Pendulum and SpringKey Features of Pendulums & Springs

Simple Harmonic Motion exists whenever an object is being pulled towards an equilibrium point by a force that is proportional to the displacement from the equilibrium point. Two common examples of SHM are masses on a spring (one that obeys Hooke’s Law) and a pendulum (with a small angle displacement)

Classically, the acceleration of an object interacting with other objects can be predicted using F = ma.

Restoring forces can result in oscillatory motion. When a linear restoring force is exerted on an object displaced from an equilibrium position, the object will undergo a special type of motion called simple harmonic motion

** Note - for AP 1, we can assume that all the springs used are ideal springs. If you plan on taking the AP C: Mech exam, that will not be the case

Periods of a Pendulum and Spring 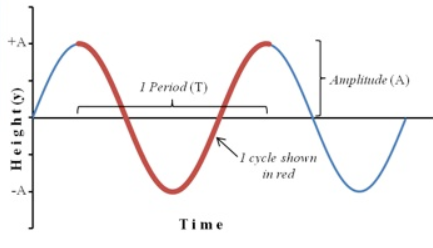 Amplitude is the height of the motion measured from the equilibrium point.

Period is the time that it takes for an object to complete one full cycle of its motion. The period is measured in seconds and is the inverse of the frequency (measured in Hz).

In the above equation, 𝜔 is the angular velocity of the object. This will be covered in detail in Unit 7: Torque & Rotational Motion

For a pendulum, the period of the oscillation can be described using the equation:

Where L is the length of the pendulum, and g is the acceleration due to gravity.

Looking at the equation, we can see that the period is proportional to the square root of the length. So a shorter pendulum will have a shorter period, and vice versa. In fact in order to double the period, we’d need to quadruple the length.

The period for a mass on a spring has a very similar equation. The only main difference is that the spring’s period doesn’t depend on length and acceleration due to gravity, but rather the mass hung on the spring and the spring constant. For a more in-depth derivation, check out this link.

When dealing with pendulums and springs, a lot of the questions you’ll be dealing with refer to the velocities, forces, and accelerations at various locations in the oscillation: