A force exerted on an object can change the kinetic energy of the object.

The change in the kinetic energy of an object depends on the force exerted on the object and on the displacement of the object during the interval that the force is exerted.

Mechanical energy (the sum of kinetic and potential energy) is transferred into or out of a system when an external force is exerted on a system such that a component of the forces is parallel to its displacement. The process through which the energy is transferred is called work.

Kinetic Energy (K) is energy an object has due to its motion. It can be calculated using the equation:

Where m is the mass of the object and v is the velocity. Notice that since the velocity term is squared, the kinetic energy of an object must always be positive. When work is done on an object to increase its speed, that work increases the object’s kinetic energy. To see how, let’s do a simple derivation. 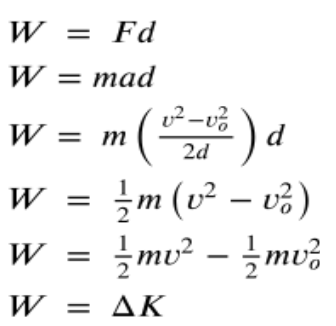 We’re going to assume an object of mass m is being pushed by a net force (F) over some displacement (d). Using Newton’s 2nd Law and some kinematics:

we can substitute values in for the net force and acceleration. 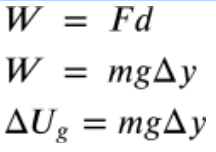 The equation above is the one most often used to calculate potential energy while the object is on or near the Earth. In fact, in order to have gravitational potential energy relative to the Earth, the Earth must be part of the system chosen. 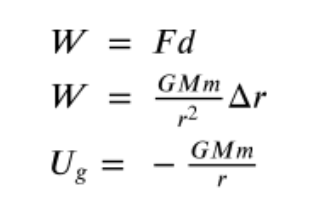 A third type of energy that can be changed as a result of work is elastic potential energy. This is energy that is stored in a spring, rubber band, or other stretchable material. (For AP 1, this material is ideal, and obeys Hooke’s Law). Elastic Potential Energy for an ideal spring is described by the equation:

Where k is the spring constant, and x is the displacement of the spring from its equilibrium position. The derivation of this equation is similar to the gravitational potential energy derivation, except the force is caused by Hooke’s Law and is dependent on x.

You may remember using a plot of Fs vs x to determine the spring constant for a spring. We can use the same plot to derive the energy stored in the spring too! Remember that Work is the area under the curve. 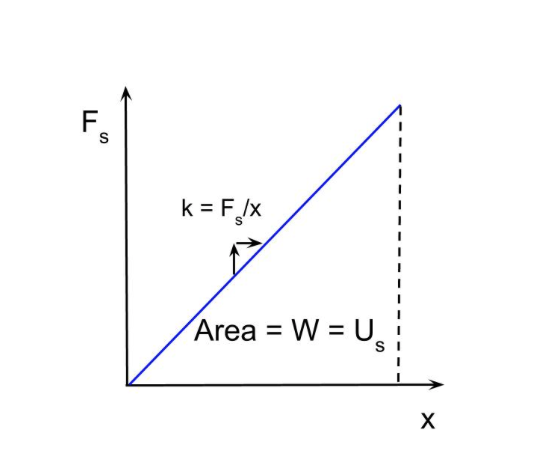 This is a catch-all for any energy that isn’t potential or kinetic. We can talk about thermal energy as energy lost in the form of heat or sound. This is typically due to friction being present, but could also be due to heat from a collision. In AP 1, we don’t have a formal equation to define this, but AP 2 will go into more detail defining this.