A system is an object or a collection of objects. Objects are treated as having no internal structure.

Key Concept: System - an object or a collection of two or more objects that are treated as having no internal structure. A system approach is often used to find the acceleration (F = ma, according to Newton’s Second Law of Motion) in which the total mass of the system is used.

Systems have properties that are determined by the properties and interactions of their constituent atomic and molecular substructures. In AP Physics, when the properties of the constituent parts are not important in modeling the behavior of the macroscopic system, the system itself may be referred to as an object.

Only external forces affect a system’s motion according to Newton’s First Law (an object at rest tends to stay at rest, and an object in motion tends to stay in motion). Because of this distinction, we must define the boundaries of a system before we can understand what forces are affecting its motion. 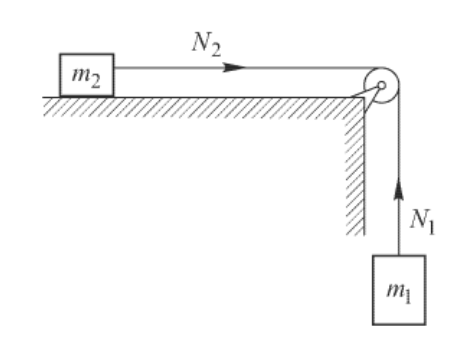 Illustrated in the image above, this particular system is comprised of a two-block pulley contraption with one of the blocks located on a table. A defining characteristic of a system is that the objects will accelerate together with the same magnitude. In addition, internal interactions such as tension have minimal changes or none at all which is why it can be regarded as a singular entity.