For the AP test, all of our work with harmony will assume that our music is tonal.

What does it mean for music to be tonal? All pitch content is organized around a central pitch that we call the tonic.

It might sound complicated, but all it means is that your tonic note is a focal point to the music. Usually, it's also the end "goal" for the melody. All the other pitches function in relation to that tonic pitch. For example, B-flat major and B-flat minor both share B-flat as the tonic pitch, but the other pitches in relation to the tonic are different (major vs. minor scale).

Tonality got really popular in music right around 1650—and it's still a big hit with modern pop artists. Western classical music veered away from tonality for a while around 1900, but tonal organization is still central to other genres such as folk and jazz.

Remember when we learned that each diatonic pitch and chord has a name? These diatonic chords usually occur in a predictable sequence called a harmonic progression that provides structure to the music.

Harmonic progressions can be described in writing using Roman numerals with appropriate markings for inversions as previously explained in this unit 3 study guide. The pace at which these harmonies change is called harmonic rhythm.

Harmonic progressions give music a sense of direction and help it arrive at a harmonic goal. In tonal music, this goal is the tonic, which is built on the first degree of the scale for the key. For example, in the key of E major, the tonic would be an E major chord. The tonic chord is labeled with the Roman numeral I.

All other diatonic chords play a role in helping music arrive at the tonic. There are two main functions that these chords can have: dominant and predominant.

(Note: even in a minor key, dominant chords will only be V and vii, not v or VII.)

Why do these two chords lead to the tonic with such a sense of finality? Consider the pitches that make up each chord.

We are in the key of Bb Major:

The V chord also resolves to the I chord especially well because it shares a pitch. The root of a V chord is the fifth of a I chord, so the voice leading from V to I is often very smooth and aesthetically appealing.

The most basic harmonic progression in the CPP is tonic-dominant-tonic. Usually, this looks like I-V-I or i-V-i (depending on whether you're in a major or minor key).

The harmonic progression over each phrase is I-V-V-I-IV-V-I. Since some of these are repeated, you could also simplify it to I-V-I-IV-V-I. In one case, the predominant briefly sets up the dominant, but the song mostly alternates between I and V.

This is super common across tonal music, and you'll find it in everything from Bach to Taylor Swift.

In the wild west of music, you'll find tonal music with lots of different harmonic progressions, but most will be some variation of tonic-predominant-dominant-tonic. Movement in the opposite direction (for example, tonic to dominant or dominant to predominant) is called a retrogression.

At the end of a musical phrase, the harmonic progression is called a cadence. There are four main types of cadences: half cadence; deceptive; plagal; and authentic.

A half cadence occurs when a musical phrase ends on a V chord. Because the V chord has a dominant function, the half cadence usually feels unresolved or unfinished. Phrases that end in a half cadence sound a bit like a question, which is then answered by another phrase that ends with a stronger cadence. 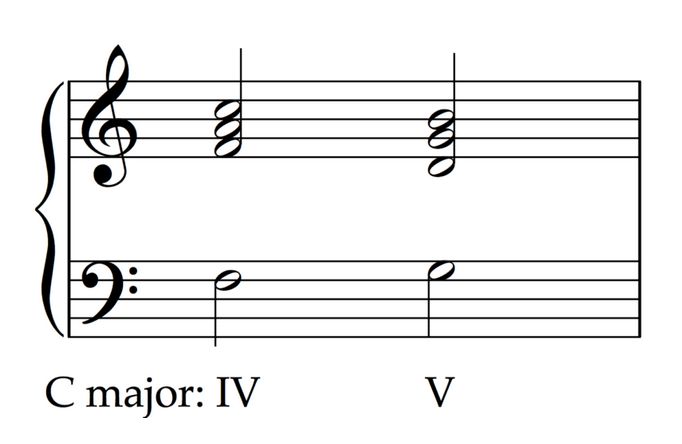 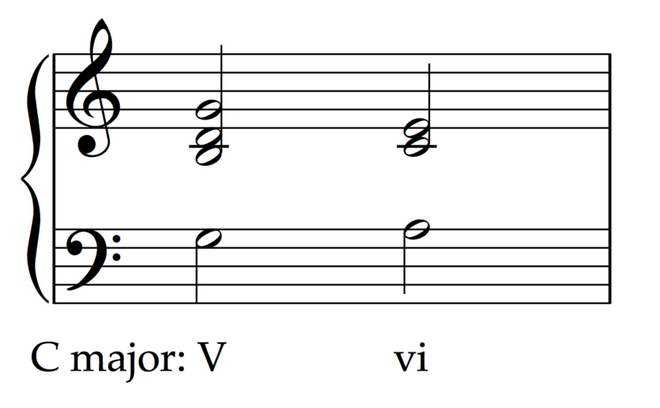 A plagal cadence (sometimes also called an "amen" cadence, since it is common in hymns) moves from the IV/iv chord to the tonic I chord. Although there is no dominant chord, plagal cadences are usually considered pretty strong resolutions. 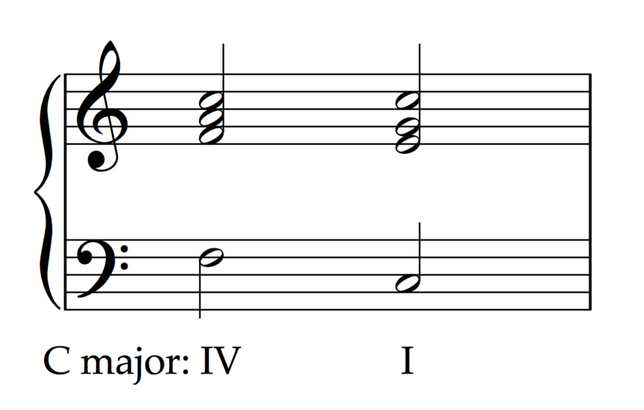 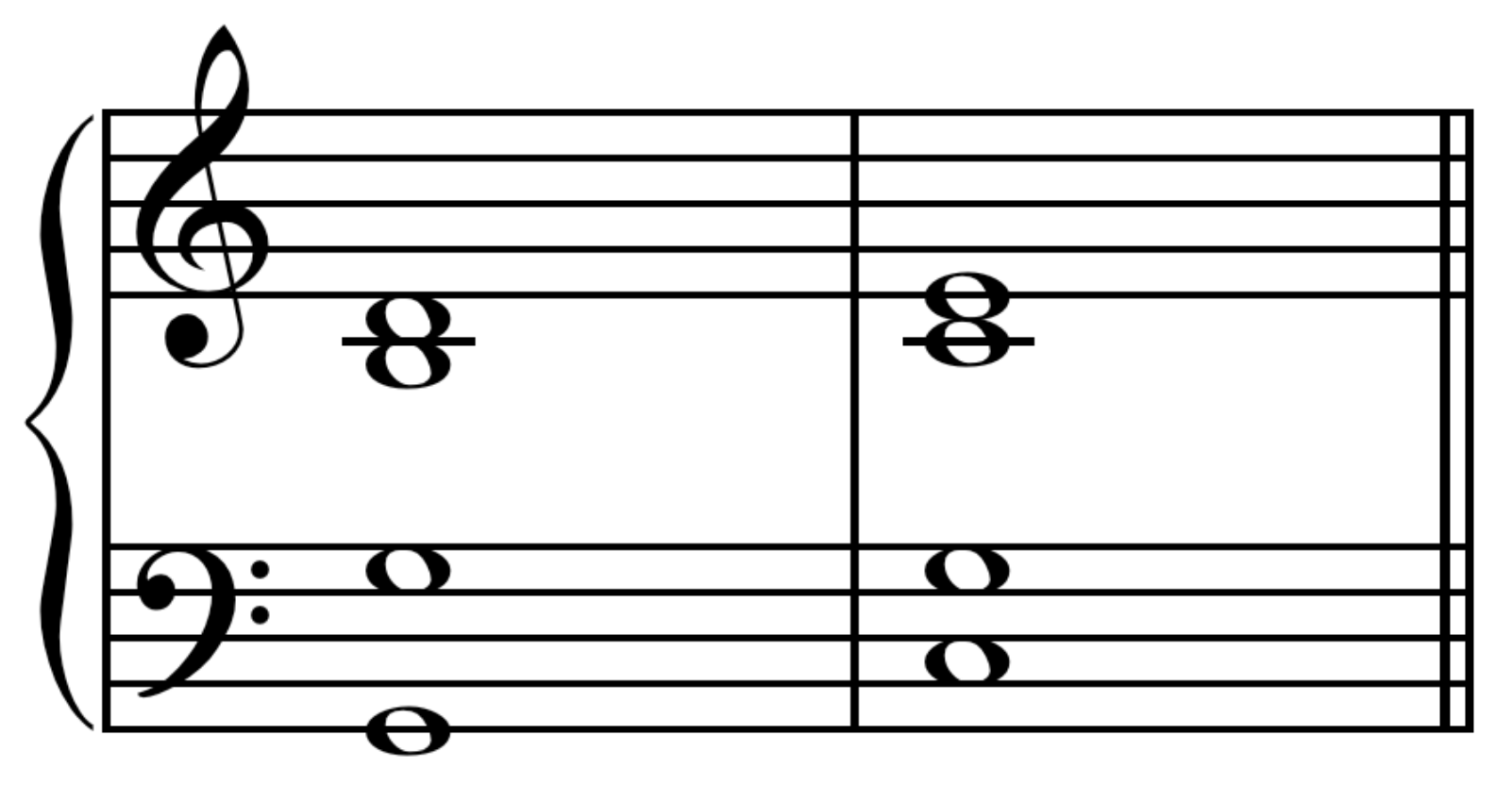 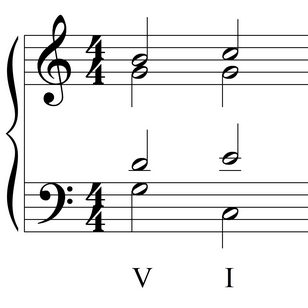 Some cadences are so iconic that they have their own special name. The most common of these is the Picardy third, which is a V-I cadence (observe the major quality of the tonic chord) in a musical work that is in a minor key.

🦜 Polly wants a progress tracker: In Roman numerals, what are the four possible harmonic progressions that follow the tonic-dominant-tonic convention? (Hint: don't forget both major and minor!)