The Basics of the AP Literature Multiple Choice

You will have 60 minutes to answer 55 questions, and this section is first on the exam.  The multiple choice section of the exam will have at least four passages -- at least two prose fiction passages, and at least two poetry passages.  For each passage, there will be between 8 and 13 questions that vary in difficulty.
There are various question types (more on that later), but the sequence of the questions will go through the passage from beginning to end, and then the last questions will ask about overarching ideas like tone or theme.

Read the blurb above each passage before beginning to actually read the passages or answer the questions.  They will give publication and topic information such as “The following passage is excerpted from a British novel first published in 1952.”  Reading these will help you decide the order in which you’d like to answer each set of questions and allow you to play to your own strengths. 💪 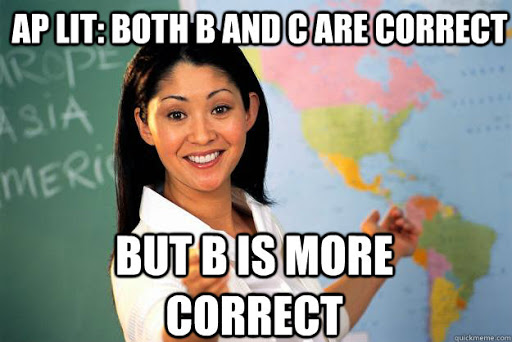 The following poem was originally published in 1921 by an African-American poet.
Beyond the cities I have seen,
Beyond the wrack and din,
There is a wide and fair demesne
Where I have never been.
Away from desert wastes of greed,
Over the peaks of pride,
Across the seas of mortal need
Its citizens abide.
And through the distance though I see
How stern must be the fare,
My feet are ever fain to be
Upon the journey there.
In that far land the only school
The dwellers all attend
Is built upon the Golden Rule,
And man to man is friend.
No war is there nor war’s distress,
But truth and love increase—
It is a realm of pleasantness,
And all her paths are peace.
The poem as a whole is best understood as
a. an metaphor for religious freedom
b. a celebration of cultural knowledge
c. a utopian view of America’s potential
d. an allegorical description of death
e. an impossible ideal of life

The multiple choice questions assess the same skill categories that are studied in your AP Lit class all year, but they are meant to be challenging and to plumb the depths of not only the texts, but your brain as well. 💥
The College Board gives the following information about skill categories and their weights on the exam.
🎥 Watch: AP Lit - Multiple Choice Intro

The questions will ask about the kinds of devices and techniques that you will write about in the free-response questions, and require that you build your analysis skills in the above categories.  But there will most likely not be device identification questions (where the answer choices would list devices like metaphor or synecdoche), so you don’t want to spend time memorizing semi-obscure terms. 😟
Let's look at some examples of those skills in questions.

Example: The Function of the Narrator or Speaker

The narrator’s perspective throughout the passage might be described as that of
a. a person in crisis
b. a hopeful dreamer
c. a reluctant realist
d. an accommodating artist
e. a pessimistic slave

Example: Explain the function of word choice, imagery, and symbols

The speaker mentions “the Golden Rule” in the fourth stanza to highlight the
a. lack of empathy found in real society
b. true nature of humanity
c. beauty in the poem’s artificial world
d. genuine need for human interaction
e. substandard education received by most students

You’ve probably practiced Lit multiple choice until your eyes cross, so you’ve seen the possible types.
MOST of the questions you’ll see have specific line references.  But it is NOT a recommendation that you read only the lines specific to the questions.  Often, those line references are the tip of the iceberg, and the question is actually asking about a thread through the paragraph or stanza, or the passage as a whole.  Even in the example above, it’s important to know the rest of the poem to know where the Golden Rule fits.
🎥 Watch: AP Lit - Prose MC Strategies and Practice