As night fell in the winter night, Roman warships were ruined by the ocean’s tides and no food 🍕 was brought to the hungry Roman legions. The Britons understood the severity of their situation and planned on revamping the war effort upon the weakened 🤕 Romans or starving them out throughout the brutal winter. Although no war was waged, Caesar understood what could happen to them, and feverishly 🤒 attempted to strengthen the Roman legions once more. Will the Roman legions be strong enough to fend off the healthy Britons? Let’s take a look!

When our troops were projected into uncertainty under these circumstances by the novel method of the fighting, Caesar brought assistance not a moment too soon; for his arrival caused the enemy to pause, and warranted our men to rebound from their fear. This done, he considered the time unfavorable for provoking and engaging the enemy in war; he, therefore, himself stood in his own quarter and, after briefly intervening, ushered the legions back into camp. Throughout these events, our troops were all actively occupied, and the Britons who were in the fields fled.

The Seventh Legion were the instance of a surprise attack where Julius Caesar brought aid to his troops being overpowered. Image Courtesy of Truor 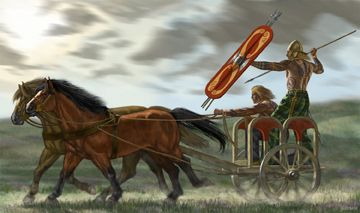 British chariots were bringing Roman soldiers into confusion once again based on their dexterity and skill unknown to them. Image Courtesy of The Lost Treasure Chest

Well, that's all you need to know for Unit 4 🤓! We hope you enjoyed this book and reading the Gallic War just as much as we did!

Now, we must return back to Vergil's Aeneid and, similarly, read Book IV of that piece as well! We hope that you have learned something and feel comfortable with the material! Take care 😃, and we will see you soon for unit 5.