The enemy clearly has the upper-hand ✋ as the Romans disembark and head towards land. The military advantage is initially shown for the Britons 🇬🇧, although Julius Caesar quickly takes control of the situation with his prestige expertise in warfare. Julius Caesar remarks on the impact of his decision unraveling within the following chapters.

Before we dive into breaking down the Latin lines into the text we can more clearly comprehend, we will answer some questions based on the designated skill categories! The skill categories for these lines are Translation and Contextualization so be aware of that when you answer these questions

When they were approaching Britain and were seen from the camp, suddenly so vicious a storm appeared that none of them could contain its course; some were conveyed back to the same port from which they had begun, others were propelled away, to their great peril, to the lower, that is, closer to the west side of the island. Nevertheless, after having cast anchor, but as they started to fill with the water they were compelled to go in a night of stormy weather out to sea, and made for the Continent. 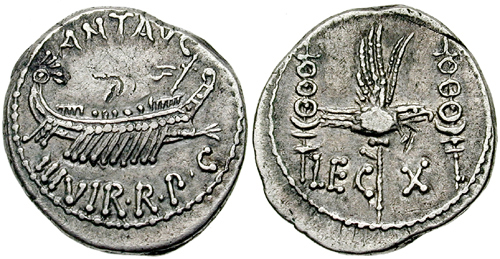 These silver coins represent the success of Julius Caesar's Tenth Legion, commonly recognized to be his most trusted and also played a crucial part in Rome's invasion of Britain. Image Courtesy of Public Domain

As the Britons ask for peace after the Roman soldiers surged up and forced them to ask for peace, the Romans question why they started attacking for no reason. Image Courtesy of Public Domain