View student writing samples for the 2019 AP Biology FRQ and corresponding feedback provided by Fiveable teacher Caroline Koffke. It is important to learn from how other students responded to improve one's own FRQ writing. 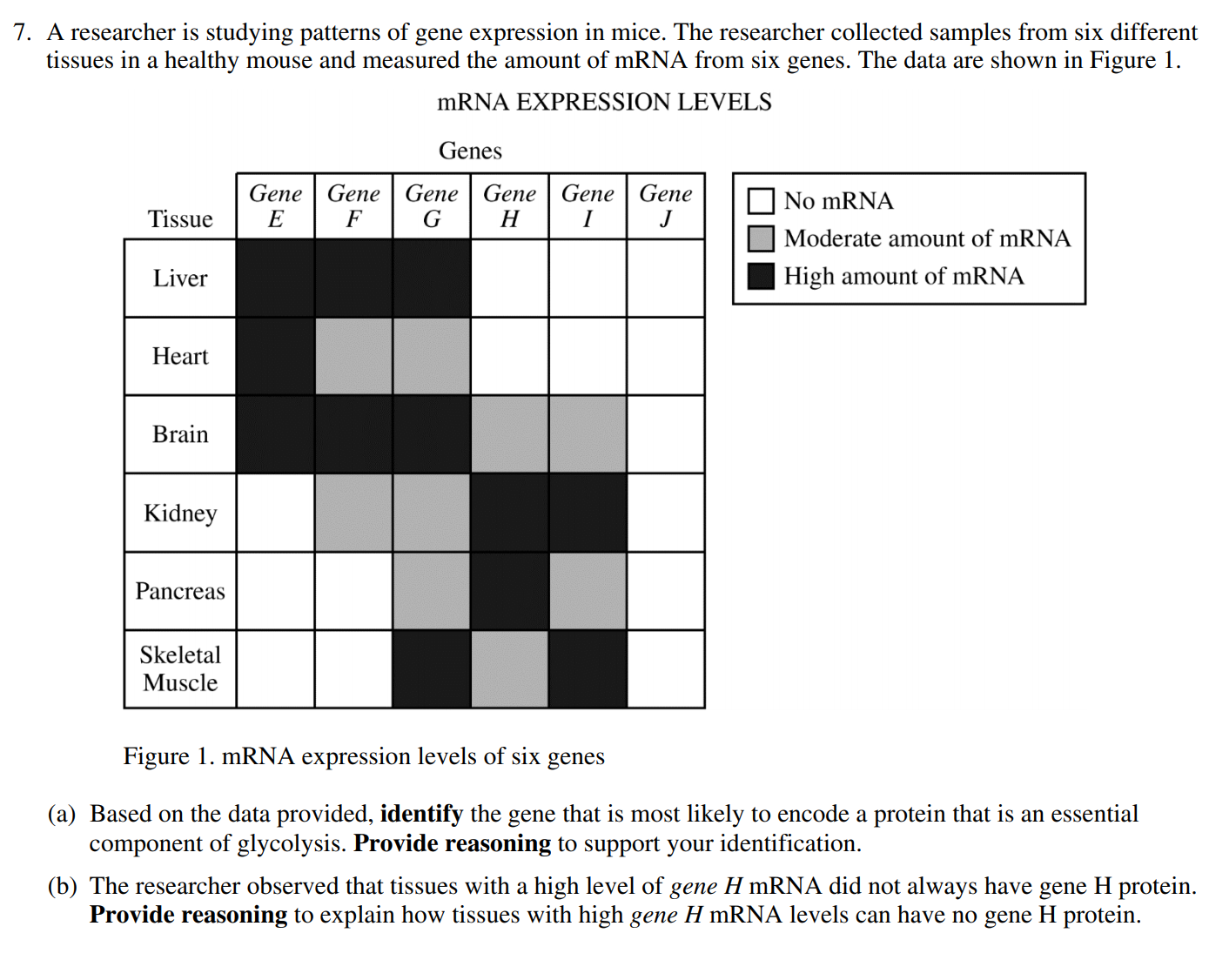 This question is from the 2019 AP Biology exam. All credit to College Board.

a) Gene G most likely encodes a protein essential to glycolysis. Glycolysis is a crucial part in cellular respiration (and is the first step), which provides ATP and energy for many functions to occur in our bodies. All of the tissues need to use energy and therefore require cellular respiration to provide the ATP it needs. Since only gene G is present in every tissue, it is most likely encoding the protein that the important process, glycolysis, needs.
b) Gene H could be more important to some tissues than others. The gene could still be transcribed by DNA polymerase and form pre-mRNA, but gene H may be removed during mRNA splicing if it is not needed, so there will be no gene H protein.

a) The most likely gene to encode a protein that is an essential component of glycolysis is gene G. The reasoning is that it is the only Gene that is actively producing mRNA in all tissues.
b) Just because the gene is present does not mean it is being translated and transcribed. It is most likely methylated, or super coiled, and unable to be transcribed into a protein.

A. Gene G is most likely to encode a protein that is essential for glycolysis. The reason that it is gene g is that glycolysis an essential part of cellular respiration and is carried out in every type of cell. Gene G has to encode for a protein essential for glycolysis as in is the only gene produced in all cells.
B. The protein may not be important but the RNA polymerase may still create the mRNA. The H gene could be removed as an intron in post transcriptional modification where it would then broken down and sued to create more mRNA.

a) Gene G is most likely to encode a protein that is an essential component of glycolysis. Glycolysis is the first step in cellular respiration and is responsible for the breakdown of glucose into a more usable form by plants/animals, to which it converts it into ATP and two pyruvate molecules which later gets broken down into more energy for the cell. All cells require energy to survive as it is one of the main characteristics of living things. ATP is the energy that drives our bodies’ numerous metabolic processes, and so all of our tissues/organs require this energy in order to be able to perform their daily functions. Since all of the tissues contain gene G (presence in the mRNA), this indicates that it’s an important gene that is most likely responsible for encoding a protein responsible for cellular respiration in some way, shape, or form.
b) The lack of a gene H protein in the presence of a high gene mRNA level could indicate that the protein may be unessential or not needed in those tissues more so than others. What ends up happening is that the gene that codes for the H protein could still be transcribed by RNA polymerase and included in the premature mRNA, but it ends up being excised from the sequence as an intron, and would stay inside the nucleus, following post-transcriptional modifications such as mRNA splicing during the process of being transformed into a fully mature messenger RNA. Thus, since gene H stays inside the nucleus and does not travel to the ribosome in the cytoplasm, it does not get translated into a gene H protein.

You received 3/3 points for your response. Great use of vocabulary!